Broadway Crowds Are Still So White

The Great White Way is just as white as ever.

Although some recent break-out hits, such as Hamilton and Slave Play, have attempted to diversify both Broadway plays and their audiences, the Broadway League’s latest demographic report reveals that among New Yorkers who attended a Broadway performance, 67 percent were white even though whites comprise 44 percent of the city’s total population.

“New York kids should be growing up understanding that New York theater is your birthright,” said Lou Moreno, artistic director for INTAR Theater, one of America’s longest-running Latino theaters producing works in English, “and that isn’t really well communicated to young kids of color.”

“It’s always been a white space,” said Julian Joseph, 31, a New York native and black actor who recently starred in the off-Broadway production The Waiting Game at the 59E59 Theater, “even more so now with the cost of ticket prices.”

Indeed, ticket prices are a barrier for New York’s minority populations wishing to attend a Broadway performance. The average price paid for a show by New Yorkers during the 2017-2018 season was $122.30. Although many theaters offer discounted tickets, often via student rush and ticket lotteries, only a small number of lottery entrants manage to snag a ticket. Lottery policies also are confusing–though, Playbill.com does include an entire list of rush and lottery policies.

That’s why Broadway theatergoers are, by and large, far more affluent than the average American. Over 60 percent of Broadway-goers earned more than six figures a year; by comparison only 25 percent of Americans earn that much.

Blacks make up over one-quarter of New York City residents, but white theatergoers outnumber black theatergoers more than 13 to 1.. 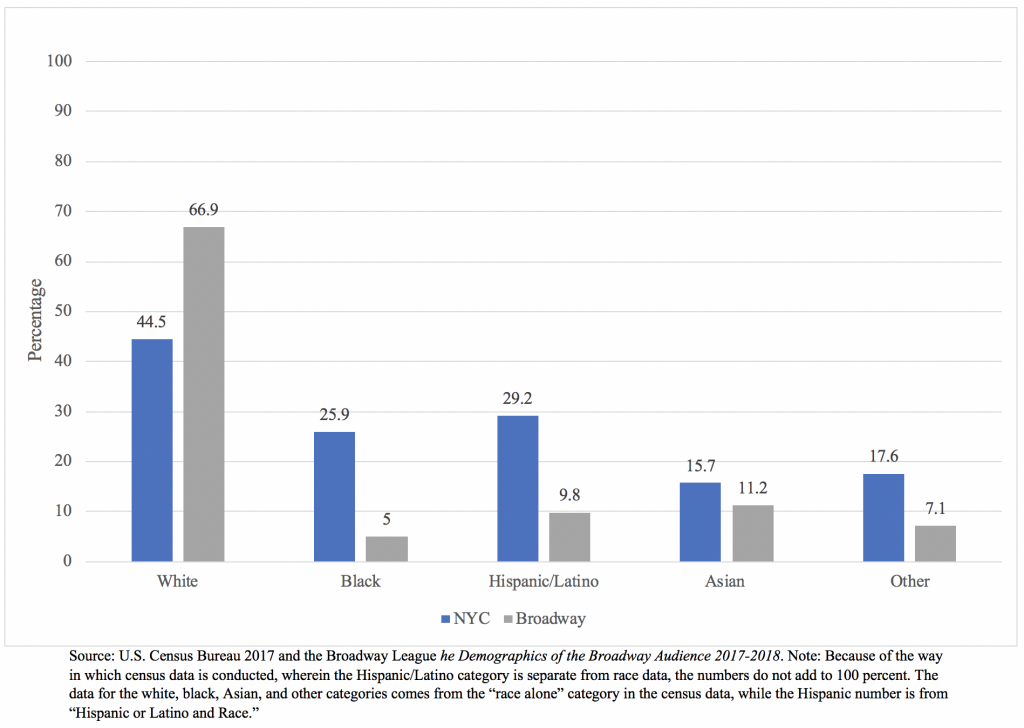 It is important to remember, however, that Broadway is also a business. “Each play is a corporation that has shareholders and investors,” said Billy Carden, who has had a long career in New York City theater and is currently serving as the artistic director of the off-Broadway Ensemble Studio Theater (EST). “The producer’s job is to make the money back for the investors in a timely manner.”

“Broadway is oftentimes about the bottom line,” said Zak Risinger, who has ten years of experience both on and behind the stage in New York City. Of Native-American descent, Mr. Risinger’s most recent credit is a starring role in Christmas in Hell at the York Theater in Midtown East. But having worked for both 101 Productions and Richard Frankel Productions, which helped produce plays such as Dear Evan Hansen and Hairspray respectively, Risinger has a unique perspective on the theater business. “The artistic message and creating something that is going to give people a voice is hard with so much money invested,” he said.

But ticket prices aren’t the only factor that keeps minorities from filling the seats of Broadway’s playhouses. “I think a bigger concern is relative material being produced,” says Risinger.

Risinger, who also worked at Playhouse on the Square in Memphis, in 2005, said that theater offerings, not ticket prices, are the primary barrier to bringing in a diverse audience. “We did pay-what-you-can nights on the second Tuesday and Wednesday of every month,” he said, noting, “Those audiences typically were not different than any other audience”–that is, over 70 and white.

“Where we found a huge uptick in African-American attendance was when we did pieces that resonated with that community,” said Risinger. A production of Crowns, for example, which revolves around six black women and the hats they wear to church, attracted a predominantly African-American audience. Although ticket prices were the same as any other offering, audiences that turned out for Regina Taylor’s play, which featured an all-black cast, was 80 percent African-American.

In this regard, Broadway is also lacking. The most recent figures published by the Asian American Performers Action Coalition (AAPAC) for the 2016/2017 season also show a demographic disparity among theater performers. According to its report on the ethnic make-up of New York City theater, white actors represented more than 70 percent of total Broadway performers.

Price or content aside, the experience of being among a mostly white audience can be an uncomfortable experience for a person of color. “I think about it often when I do see an all-white audience indulging in black or Latino culture just seeing it simply as entertainment,” Joseph explained, “They’re not getting curious to learn.”

There has also been a drive for Broadway to engage in more acts of community outreach to attract a broader and younger audience. Natalie Hirsch, the artistic director for the 52nd St. Project, which works with elementary through high school students in Hell’s Kitchen, most of them children of color, discusses how many shows will donate tickets to allow students an opportunity to see a Broadway production. For example, Daniel Fish, director of the recent revival of Oklahoma! on Broadway, noticed the racial disparity among his audience. “He reached out to us and said, ‘I’m sitting in the audience of my show and I’m just seeing all these older white people come see my play,’” Hirsch recalled him saying. “’I want to buy 20 tickets for you guys to bring your young people.'”

There is, in fact, room for cautious optimism. “I think it’s getting way better,” said Joseph noting the recent push for Broadway programming to include more diverse voices. This is reflected in both the Broadway League and AAPAC’s reports, which indicate the ethnic gap closing over the years, though gradually.