Sorry for the delay in the post guys, but here we go! 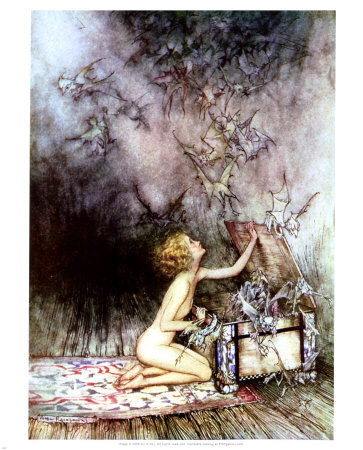 According to Wikipedia’s article on the famed Pandora’s Box, “Pandora had been given a large jar and instruction by Zeus to keep it closed, but she had also been given the gift of curiosity, and ultimately opened it. When she did so, all of the evils, ills, diseases, and burdensome labor that mankind had not known previously, escaped from the jar, but it is said, that at the very bottom of her jar, there lay hope.” Now, such myths, in collaboration with the biblical tale of Eve tempting Adam to partake of the forbidden apple, have characterized women as the downfall of mankind. This concept, in my opinion, has had a significant impact on the media and all forms of art ranging from painting, sculpture, drawing and, in our study, film. What I speak of is the prominence of the femme fatale character in the films we have studied thus far. Whether it is Elsa Bannister from the Lady of Shanghai (1948), Gilda from Gilda (1946), or Laura from Laura (1941), women are shown to stir the emotions of and expose the vulnerabilities in the male leads. Furthermore, our reading of Laura Mulvey demonstrated that women are also display pieces that satisfy our scopophilic urges whether we view them from the perspective of an audience member or look through the eyes of the cast. Film’s paternalistic roots have made it such that women are primarily objectified and, in the instances in which they demonstrate power, they do so out of self-interest and treachery. We have bought so far into the idea that, a “strong woman” is viewed as a woman who behaves like a man.

In the Lady of Shanghai, through her beauty and feminine charm, as well as her ability to portray herself as a damsel in distress, Elsa uses Michael and George as tools to further her own agenda, eventually leading to Michael’s imprisonment. In Gilda, Gilda provokes Johnny to no ends, compromising his position and causing him to act irrationally. You see the rage that arises on his face each time she enters the room and, despite his attempts to be apathetic, he acts out of spite. Though the film has a happy ending, Gilda has an overall negative effect on the male protagonist. In Laura, a calculating and overly logical human being, Walso, is transformed into a possessive and jealous man for love of the fair Laura. Though it can be argued that his own ego is his downfall, even Laura herself seems to feel that she is, at least partially, the source of his demise. In all these films, women have a severely negative impact on the behavior of the male lead, despite their intentions. Their power is apparent only as far as they can exert influence on the male characters, as they are shown to have no direct control of their own. Viewing the films in this light, as is commonly done in film noir, however, would be a mistake. There is greater complexity to the roles, as is discussed by Julie Grossman’s piece, Film Noir’s “Femme Fatales,” Hard-Boiled Women: Moving Beyond Gender Fantasies. She explains how our characterizations of woman limit the ways in which we view them in society and shows us the necessity of reassessing the concept of gender. Women are to be seen as they are as human beings, beyond the constructed ideal that has been imposed upon them.

It was very interesting when, in class, we found it extremely difficult to name strong female characters that did not demonstrate traits we found to be classically male. I believe this is rooted in a tradition of male defined social roles. We must realize that social dynamics are products of the people of their time. There is no male or female trait until we ascribe value to an abstract feature, whether it is sensitivity or apathy, or passiveness or forcefulness. These are just features of human beings that have been accepted as defining one sex or another for so long that we have become accustomed to them. Despite the revolution in thinking brought about by the feminist movement and the civil rights movement, our mainstream film has lagged behind the times. If only the hope found at the bottom of Pandora’s Box could lead to film representing the true HUMAN condition.

I would love to hear all of your thoughts on this issue.