I don’t know if you guys are aware of TED talks, but I am a huge fan. I find the website and the talks incredibly thought stimulating, like nothing else.

I recently watched this talk (posted above), by James Randi, a former stage magician and now a paranormal skeptic ( a cool career title, huh?). Since we just had a topic of supernatural activity in contemporary horror, I found it useful in relation to some of the movies we watched and topics we discussed. However, this is a little different, since Randi is not talking about a fiction world of the movies, he is talking about real facts and real people, who actually truly believe in supernatural forces and pay their very real money to come in contact with this make-believe world. And why are there so many people around the world convinced that this works? As Andy suggests, it’s because the paranormal activity is highly publicized to please sponsors.

If you think about it, there is sense in it. We watched all these movies like The Blair Witch, Paranormal Activity and the Sixth Sense. Well, just tell me you are not a least a little nervous to go get some water in your house at night in the dark now? Ok maybe you are not like me, maybe you are more sane. But really, would you travel to the woods at night after watching Blair Witch?? And now imagine that the next day after watching this movie you see a talk show, a documentary and read a magazine article about similar supernatural occurrences.In such a case, it’s all around, from different sources, must be somewhat more credible.

This is how psychics work, psychics just like legendary Sylvia Browne. They are publicized all over the place, they are talked about, and most importantly they play on people’s feelings. Just like Randi says, they take advantage of “innocent, naive and grieving” . Unlike movies made for entertainment, these frauds are not fun, he is right. They not only convince vulnerable people that what psychics are doing is true, but they also take fairly earned money for it, for fiction. So where is the line between fiction and reality? Why is it that people are having such a hard time distinguishing this line? Can it be that such movies as Blair Witch and Paranormal Activity work not only to entertain and scare people, but also to deceive and create more room for the multi million-dollar psychic industry?

Whether you believe in supernatural or not, watch the clip, you would not regret it. (James Randi also talks about homeopathy.)

I would like to turn back a little and continue on the topic of cold war and mass propaganda, this time examining it from the point of view of Russia. It’s pretty obvious that if America had propaganda, where communists seemed evil and manipulative, Soviets must have also used mass media to control their population. I found a great documentary called “Soviet Animated Propaganda” , which depicts a history of all the mind controlling cartoons made by Soyuzmultfilm Studios from 1924 to 1984. Thirteen parts of it are available on youtube.  Here is part one to start with.

I thought it would be interesting to know how Soviets portrayed Americans in the cold war period. During WWII, media was created to align people against fascism, and during cold war American capitalism took its place. It seems that Soviets stayed on top of their game and criticized every single aspect of American life – the money, racial divisions, war strategies and so on. As Igor Kokarev says in the film, people were persuaded to believe, which they did, that they live in the best country of the world, and that the rest of the world with their money and ideologies is absolutely evil: outsiders are the enemy. As Kokarev notes such strong propaganda was so successful, because Soviet people were artificially isolated from the rest of the world, and lived almost like a “cult”. Children from early years were taught how to view the other countries and how to react to certain situations. All children and adults were given the same mindset, the same resources of knowledge, therefore leaving all on the same page. The government created thousands of propaganda posters, which were hanged on every wall in every institution – from schools, busses, cafeterias to private homes. Those posters “told citizens what to do and how to think and who to blame”. All media was strongly supervised and corrected “very stubbornly” up to the last days of the Soviet Union.

I urge you to watch this documentary even though its long, if you are at all interested in media as a brainwashing device. I found it very interesting, since it goes through most of the propaganda cartoons ever created by USSR. After watching this, I got a strong sense that the Hollywood blacklisting was minor, compared to this large degree control in Soviet Union, where nothing could leak out.

Since we are now in the neo-noir period in our studies, I feel that it’s necessary to mention a great comic approach to film noir as portrayed in live-action/animation hybrid “Who Framed Roger Rabbit” (1988) directed by Robert Zemeckis and produced by Steven Spielberg.  Just like many neo-noir classics, the film is set in 1947 and it employees multiple technical elements as well as basic themes of the noir period. What is interesting about this film is that even though it is made as a hilarious caricature on film noir, it still captures the viewer and evokes a sense of betrayal, injustice and anxiety.

The film portrays a private investigator Eddie Valiant (Bob Hoskins) who is hired to get dirt on Roger Rabbit’s wife, Jessica. Sounds familiar yet? How many movies of the noir period have we seen that star a private investigator, who makes a living by catching people cheating? Most recent example – Chinatown. In addition, just like Curly in Chinatown, when Roger finds out the truth by looking at black and white pictures of his cheating wife, he is so heartbroken that he starts crying right in the office (Venetian blinds in the background), and is given a shot of liquor.

When Eddie goes out to see Jessica( a classical femme fatale), he travels by dark empty dirty streets to a glamorous toon cabaret. There he witnesses Jessica’s performance, which is done in classical noir style. Don’t know what I mean? Just think of Gilda’s strip tease performance of “Put the Blame on Mame”. Both wear a strapless elegant long dress and long gloves, and even their bodies have a similar shape. Also both women walk around and tease men as they sing. 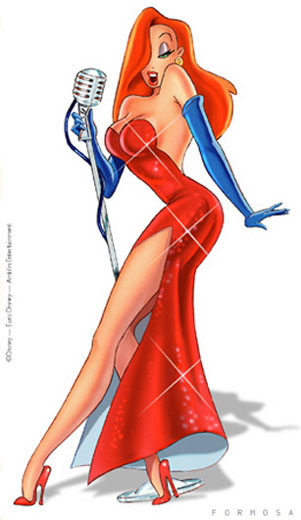 Another aspect used is a classical good cop – bad cop combination most evident in the Touch of Evil. Both Eddie and Judge Doom (Christopher Lloyd) supposedly represent police, but Judge is completely corrupt and works only for his own benefit. The judge has a team of gangsters running around with guns and cigarettes doing dirty work for him. Even the threats they give are so similar to each other. For example in Who Framed Roger Rabbit they say “ Step out of the line and we’ll hang you and your laundry to dry”. Similarly, in Chinatown Polanski says to Giddis as he cuts his nose “ Next time you lose the whole thing. I’ll cut it off and feed it to my goldfish”.

The general plot of the “Who Framed Roger Rabbit” also depicts film noir themes. For example, just like in Lady from Shanghai, Double Indemnity and The Touch of Evil, the main character (Roger Rabbit in this case) got framed/used. Also, similarly to most of the movies we watched, the whole plot revolves around control, capital and power: Acme was murdered so that toon town would be owned by a bad guy. And of course there is a femme fatale who stimulates our scopophilia  (Mulvey) and leaves Roger Rabbit in distress .

So how does such a comic film based solely on film noir caricatures manage to make us nervous for the fate of the toons? Is it because they are so lovable and cute? I think its because it evokes fears of betrayal, injustice and  loss of loved ones which would never be out of date. The film takes classic elements and themes of film noir and by combining it with modern technology makes “Who Framed Roger Rabbit” another neo noir classic to remember.