I hope you enjoy the video that Daniel, Jhaneel, Vik and I put together. Below is a link to the actual scene:http://www.youtube.com/watch?v=XeN5cpfTBJ0

In class, we had a short debate on whether prosthetics or computer generated imagery (cgi) stirred more thrills. After thinking about this after class, I found that I could not come to a decision. Prosthetics are tangible, and subsequently realistic if done properly. CGI is intangible, and while at times may seem less realistic, the technology is constantly improving, with almost possibilities only limited by a person’s imagination.

Prior to the turn of the century, the use of prosthetics was the norm, with CGI seeming like a gimmick. It is during this time that I think prosthetics had the clear advantage in terms of generating the thrills in movie goers, which we referred to in class. To use a science fiction film as an example, I would consider the original Star Wars series to be an example of prosthetics being superior to CGI. Using early technology, George Lucas superimposed various characters into the classic film. Below is a comparison of a physical v. digital Jabba the Hutt. Rather than the character appearing realistic, it seemed cartoony and laughable. Though the original film had relied on antiquated models and prosthetics, they had had a classic feel that was damaged with these digital additions.

CGI techniques have greatly improved since the early days. Now they are taken much more seriously, almost taking the classic “magic of the movies” out of the equation and moving it all to the computer. We see constant remakes of classic films, where directors reimagine the movies using CGI. The King Kong classic that we discussed briefly in class is one such example. Peter Jackson was able to take a claymation King Kong and transform him into a realistic CG-animated beast. This allowed for contemporary audiences to see King Kong in a shockingly realistic light, which was perhaps the same historically contextual experience that audiences had back in 1933. I feel CGI added a lot to the film, giving the movie its long lost thrills.

Tying back into the discussion on fear and anxiety, I feel that both CGI and prosthetics have their advantages and disadvantages. Right now, horror films use a combination of the two techniques in order to pull off frighteningly realistic effects. The remake of Nightmare on Elm Street uses a combination of effects to show a more realistic and gruesome depiction of Freddy Krueger. The dream sequences are able to tap into CGI technology to pull off astonishingly realistic effects that had not been available back in 1984. The audio is also digitally enhanced, bringing a supernatural quality to the character’s voice.

Finally, I believe the thrills are not generated by CGI or prosthetics in film, but rather in how they are implemented. I think it’s important to note that the remake of the “Nightmare on Elm Street” film had been rated 33/100 by Metacritic. Entertainment Weekly remarked positively on the films use of CG in crafting the character. “The new Freddy, his singed skin more icky-realistic and less latexy than before, has been molded to Haley’s already scary features: the sunken cheeks and pitted face, the mouth that leers like an open wound,” stated reviewer Owen Gleiberman. The New York Times review had a very different opinion of the CG in the film stating that, “The filmmakers’ use of computer-generated effects doesn’t help much, and makes a few of the scenes that should be horrifying look silly.” I suppose the final decision of prosthetics v. CGI is ultimately up to the movie goers.

Dr. Strangelove is one of the best satires on the paranoia of the Cold War. During a time of great fear and panic, Dr. Strangelove served to offer a more humorous approach towards the threat of mutually assured destruction. This greatly contrasted with other movies, such as the short film “Duck and Cover”, which only seemed to add to America’s fear of nuclear war with the Soviet Union. There is a snowball effect of panic, where out of the fear of the spread of Communism, there is the rise of the military industrial complex. Such a response only triggers a similar reaction by the Soviet Union, thereby adding to the fragility of foreign relations. Dr. Strangelove understands these fears, and is able to effectively turn them into a form of entertainment, during a time when many only seemed to add to the anxiety.

But Dr. Strangelove was by no means the only satirical take on the Cold War. Tom Lehrer, a famous American satirist and songwriter during the time of the Cold War, recorded “So long, Mom” in 1967, which remarked on the same fear of mutually assured destruction. The youtube video of the song is embedded here for your entertainment. Strangely, I found it rather difficult to find many musical satires of the Cold War during the 50s and 60s. There seems to be a trend, where during times of crisis, there are spikes in the entertainment industry. During the Great Depression, Vaudeville adjusted itself according to the economic times, becoming an excellent means of escape for those in great hardship. In recent years, the entertainment industry has performed exceedingly well, correlating with the exceedingly poor performance of the economy.  As a result of this correlation between economic and political fears with the performance of the entertainment industry, it would only make sense for artists to cater to this shifted environment. Additionally, Tom Lehrer’s satire offers a unique perspective on the time period, where he produces songs during the time period, as opposed to in retrospect. It is one thing to comment on the irrational fear of the constant threat of nuclear war with foresight, but it is entirely different to create a piece which acts almost as political commentary. In addition, Tom Lehrer also produced the song “We Will All Go Together When We Go”, another piece on the threat of mutually assured destruction.

Weird Al Yankovich’s “Christmas at Ground Zero” is an example of entertainment that focuses on the threat of nuclear winter. During the time of its production, the Cold War was coming to a close, and after existing for many decades, the threat of nuclear war seemed increasingly distant. What I found particularly interesting in the music video is that many of the scenes were taken from the same “Duck and Cover” video that we had watched in class. It’s also amusing to see the contrast between the fear of total destruction by nuclear winter and the joy of the holiday season.

The moment I watched Gabrielle open the mysterious box in Kiss Me Deadly, unleashing a possible apocalypse in the process, I suddenly remembered that I had once seen a movie with a similar box before. After briefly googling, I found that similar case to be in Quintin Tarantino’s Pulp Fiction. In both movies, there is a case with unknown contents which glow brightly upon opening. While the contents are never revealed, they are implied based on the descriptions of them and the emotions that they arouse in the characters. It is the fact that the contents are never revealed, which leads me to believe that both mysterious boxes are defined not by their contents, but rather by the emotional responses of the characters that seek them. 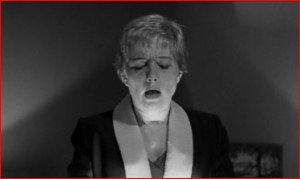 In Kiss Me Deadly, almost all who sought to retrieve the case ended up dead. Mike Hammer only survived after realizing that its contents are more serious than he could handle alone, and that he should hand it over to the police, thereby ending his desire for the box. While the contents of the case are never revealed, it is assumed to be a kind of dangerous atomic energy. Released during the Cold War, this movie is an example of the public’s general fear of a nuclear apocalypse.

Pulp Fiction’s mysterious case is far less lethal in contrast, but causes the same sense of desire in characters. To briefly summarize the movie without spoilers, Pulp Fiction tells the story of a number of individuals involved in a criminal network led by Marsellus Wallace. The suitcase makes several appearances throughout the movie, carrying with it the same mystique as the one in Kiss Me Deadly. The contents are never revealed, as with Kiss Me Deadly, and those who seek to possess it generally end up dead as well. There is much speculation on what the box actually contains. The Toronto Star even held a contest to determine what was in the box. Though there is only speculation, as the director insists that the suitcase serves merely as an interesting plot device, the most widely accepted interpretation is that the box contains Marsellus Wallace’s soul. It is believed that the boss of the criminal network sold his soul to the devil, and is attempting to buy it back. There are a number of clues that lead to this conclusion, such as the strange bandaid on Marsellus’s head, the suitcase with “666” as its combination, and the supposed miracle which protects two hitmen who seek to reclaim the box. In Tarantino’s film, the contents of the case are so beautiful and valuable that all those who see it, wish to keep it for themselves. It is important to note that the original contents of the box were to be diamonds, but were removed from the final cut of the film. Perhaps in that case, the suitcase would have served as a symbol of financial greed.

While the contents of both boxes are never known, they both have an aura of mystery around them, causing characters to seek them, and often die trying. Other than both having luminescent contents, both cases are defined by the emotions which they arouse in the characters of the movie, as their contents are never really known. Though no concrete conclusions may be made, I found the similarities of both movies interesting enough to warrant a blog post.