So the threat of a cold war is still alive! If The New York Times says so, it must be true. Here’s an interesting article I stumbled upon on my daily perusal of the NYT website:

Basically, the article says that there is still a cold war going on right now. Except it is called terrorism. Al Qaeda plays the role of the communists. The middle east is today’s Soviet Union. In the past, America “faced an enemy with ‘no scruples about employing any weapon or tactic'” and feared that they would smuggle nuclear weapons into the country. The threat we face today is terrorists concealing dangerous weapons and “killing tens of thousands of Americans.”

So when did the cold war turn into the war against terrorism? After the murder Israeli athletes in the 1972 summer olympics. Nicknamed the “Munich Massacre,” a group of eight Palestinian terrorists broke into where the athletes were staying and kidnapped 11 Israeli athletes. All were killed. (Steven Spielberg’s 2005 Munich depicts this event.)  Alarm was also obviously heightened after the September 11 attacks.

NYT states that “most security experts believe the focus in recent years on destroying of locking up nuclear material is far more effective than sealing American borders” (like they did during the Cold War era). Do you agree? Has it improved? Does the public feel safer because of this?

My friend shared this website with me and I thought it was pretty entertaining so I will pass it on to you! (The image is too large to post here.) It’s a really elaborate flowchart and you begin in the center red box titled, “Where are you?” Have fun!

The Cold War lasted approximately from 1947 to 1991 and it was a period of high tension and political conflict between the USSR and the US. There was not any physical fighting, but there was conflict behind the scenes: military alliances, espionage, propaganda, the nuclear arms race, and a race for technological innovations.

I came across this song by Sting from his debut solo album, The Dream of Blue Turtles called Russians. In it, he sings of the consequences of the Cold War and of what we could do to save the world from the escalating shows of power.

In Europe and America, there’s a growing feeling of hysteria
Conditioned to respond to all the threats
In the rhetorical speeches of the Soviets
Mr. Khrushchev said we will bury you
I don’t subscribe to this point of view
It’d be such an ignorant thing to do
If the Russians love their children too

There is no historical precedent
To put the words in the mouth of the president
There’s no such thing as a winnable war
It’s a lie we don’t believe anymore
Mr. Reagan says we will protect you
I don’t subscribe to this point of view
Believe me when I say to you
I hope the Russians love their children too

Please take the time to read the lyrics. Each line is really very meaningful. The song’s lyrics and Sting’s mournful voice really portray the despair of the situation. He wants the everyone to get along to ensure that a future will exist for generations to come.  The last four lines are really poignant. Sting says, we are all human beings; you and I are made of one and the same. Why can’t we just get along and live in peace and harmony?

I think Sting’s debut of this song was very taboo, but I applaud him for being courageous enough to come out with this radical song. People were very frightened by the prospect of another World War and there was a lot of hatred towards foreigners. They were anti-Russian, anti-Communist, and anti-foreigner. Sting tries to soothe people by singing about the innocence of sons and daughters, trying to convince them to unite peacefully for their sake. 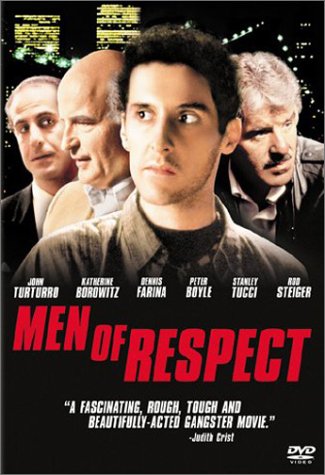 Over this past winter intersession, I watched Men of Respect, written and directed by William Reilly in 1990. I should mention that this film is an adaptation of Shakespeare’s MacBeth. Here is a link to the trailer but I could not find a clip that I could put on the blog. Men of Respect Trailer

It is a drama about a man named Mike Battaglia who starts out as low-ranking hit-man and eventually rises in the ranks of the Irish/Italian mafia. I felt that this movie hit the three main topics of this class very accurately. I will discuss them below.

FEAR. The movie’s opening scene is set at a diner where a group of mafia men are sitting around a table in a booth talking to each other in serious tones. The lighting is dark and the diner is filled with clanging sounds of utensils scraping the dishes. Then the movie cuts to the parking lot outside the diner and shows Mike handling a deadly looking shotgun. He storms up the small set of stairs to the diner and, with no expression on his face, points the shotgun at the man in the center and shoots him in the head point blank. Mike goes on to target every other man who was sitting at the table as all hell breaks loose. There’s blood everywhere, splattering all over the walls and the white linen napkins. After the gunshots stop, the camera pans to the casualties all over the diner and Mike is the last one standing. He has a crazed look in his eyes and blood patterns across his white t-shirt. I felt that this scene played on humans’ most primal fear: death. I personally (as I’m sure many other people are) am afraid of death and refuse to think about it even though it is the inevitable. In this movie, the thought of death strikes a feeling of fear in the audience.

PARANOIA. Now throughout the movie, Mike’s wife, Ruthie takes a “masculine” role in the relationship, pushing him and urging him to do whatever is necessary to become the mafia  king. She uses sex to convince him when he is doubting whether or not to kill Charlie (the don at the time). She says “You do everything. They do nothing.” Ruthie tells Mike that together, they can rise to the top and everyone can look up to them and report to them. However, after Mike kills Charlie, he goes insane with paranoia. He is constantly looking over his shoulder. He hallucinates and sees a good (but dead) friend that he had put a hit on and causes an embarrassing (to say the least) scene at a party where he shouts at the ghost.

ANXIETY. Because there is this constant threat of someone retaliating against Mike for all the people he has killed to get to the top in such a short amount of time, the tensions in him and Ruthie build. The voices of all the dead people eat away at his sanity. The climax of the movie comes when the other mafia “associates” plot to take down Mike, whom they feel has completely destroyed their sense of order and hierarchy. The associates raid Mike’s building in a flurry of gunshots. Ruthie slits her wrists and dies slumped over the bathtub. Upon discovering her, Mike goes even more insane (if possible). However in the end, Mike dies at the hand of one of the associates.

So ladies and gentlemen, I hope you have understood (and hopefully enjoyed my application of) the elements of fear, paranoia, and anxiety in the film, Men of Respect.  I bid you all good night.