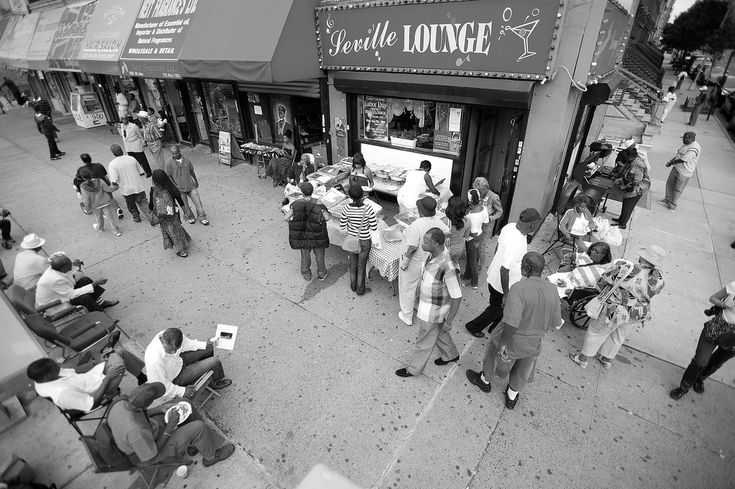 Harlem appears to have upheld the features of vibrant streets and roaring entertainment life. Harlem is also still engorged in culture by the people that densely populated the area; African Americans. It is undeniable in the image that the New New Negros, African Americans, are mingling at the stoop of the brownstones on the far right. And there are “mom & pop” shops decorating the length of the street. The people are in fellowship with one another or minding their business like the man sitting down on the far left as people pass him.

Walking down 125 street today and crossing avenues from Lenox Ave. to Lexington Ave, these sights are not rare and extremely common. This image is similar to the ambiance and image of Harlem today. The only thing that has changed is the density of people living in Harlem and the demographics of Harlem. The rich culture exists there today. there are arguments that the demographic of Harlem changed severely due to gentrification. Over the years, it has become a famous area that everyone wants to be integrated with. The New Negro could not fathom that the culture they’ve established is now in high demand. Whether it is for the rich history, reclamation, or the enjoyment of New Negro’s freed developed culture, Harlem preserves the culture unimaginably.

The New New Negro is successful in the maintenance of the culture of previous New Negros established from 1910 to 1940. Harlem still upholds the rich association with New Negros through the culture there. Today Harlem roars rich New Negro culture. Harlem is a historic location to reminisce. The New Negro left their undying culture in Harlem that is more acceptable for society today. The New Negro permanently signed their culture into an unwelcoming world from 1910 to 1940. It is preserved for witness today.