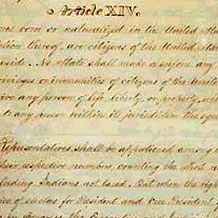 This text is a primary document because it is the original text of the 14th amendment. It was added to the constitution at July 9 1868. It established the citizenship clause, due process clause, and the equal protection clause. Each clause was meant to give African American’s equal rights after the civil war. This text was important because it was one of the first step to let the African Americans to taste what freedom is about.

When the 14 th Amendment that was ratified during the Reconstruction Era, the main portion of the amendment was that it indicates that a person will become citizen when they are natural born in the United States. Naturalized citizens will have the same rights as American citizens. They will be protected under laws. African Americans who were born after the ratification of this amendment have gained such freedom and they will be given the rights just like an American citizen. Many African Americans have the rights to own property, to go to school, and so on. They were also gaining political powers by having the chance to work in the congress. They also had the opportunity to set up their own community for gathering and socialization.

One thought on “Citizenship for All”