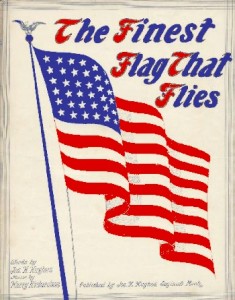 I think the words in the image are a pretty adequate caption, but take a minute to think about what the flag means to us today - because according to what's written in chapter 19, its not even close to what it came to represent during WWI.

In chapter 19 there is section entitled “Coercive Patriotism”, wherein Foner briefly describes the extent to which the Patriotism of World War I era America was sometimes nothing more than a forced loyalty.

The American flag became more than just the sign of a nation, it became a symbol of commitment to democracy and a test of a person’s true patriotism. He even goes so far as to say that “Persons suspected f disloyalty were forced to kiss the flag in public; those who made statements critical of the flag could be imprisoned.”

Apparently, freedom of speech didn’t really apply to those speaking of anything other than freedom.

While Foner’s coverage of the topic does seem sufficient as compared to that of some other points (like the era’s rapid advancement of war technology), I feel that, especially when considering the book’s title ‘Give Me Liberty’, it would have made sense to go in depth to describe the extent to which the American People’s freedom seemed to be rather non existent. Maybe its just a modern ideal, but since when is forcing anything on the people of our nation really the American way…?