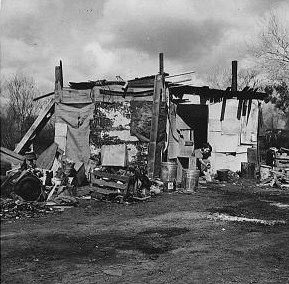 A "Hooverville" home, located in a shanty town during the late 20s early 30's. 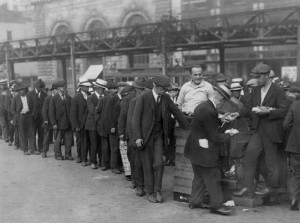 A bread line during the Great Depression.

The first photo shows a house made of salvaged boards and planks that poor Americans who lost everything during the Depression lived in.  Many families lost all of their money in the stock market and were left homeless, so they moved into parks, under bridges and into the woods where they formed little communities.  These towns became known as Hooverville’s, because many people blamed the President (Herbert Hoover) for the economic collapse.  These communities began popping up all over the nation as more and more of its citizens fell upon desperate times.  The second photo shows a bread line in a major city.  In an attempt to provide some relief, the government provided food to the most needy of its citizens.  Bread, stew, soup and water were the most common commodities handed out to starving men women and children.  It was not uncommon to see thousands of people waiting on one of these lines hoping to get a few scraps of food to get them through the day, because they did not know when their next meal might be.