The roots of the “Roaring Twenties” can easily be traced to the unprecedented growth of the new American automotive industry. Basically created because of Henry Ford’s perfection of the process of mass production with his development of the moving assembly line in the early part of the 20th century, the rapid expansion of the industry gave way to one of the most prolific eras of economic boom in American history. 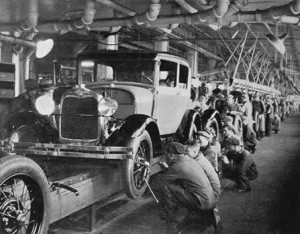 In chapter 20, Foner mentions that “The automobile was the backbone of economic growth.” Citing that the production of cars had tripled annually during the 1920’s. What is the most significant aspect in measuring the success of the 1920’s with the explosion of the auto industry, however, is that although Automotive factories would seem to replace the steel and textile factories that were the driving force behind the inturstrial boom of the late 19th century, it would actually bring expansion and success to the production of  “steel, rubber, oil production, road construction, and other sectors of the economy. It prompted tourism and the growth of suburbs…” (Foner, 722)