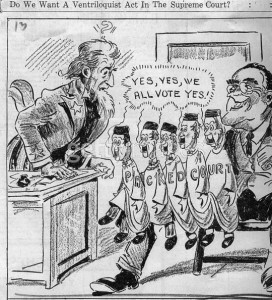 The caption of this political cartoon during the New Deal Era is called “Do We Want A Ventriloquist Act In The Supreme Court?” This caption was made to mock President Roosevelt’s court packing strategy. Since we know that the president appoint the Supreme Court justice, he can appoint a justice that is in favor of his many New Deal Acts. The cartoon also showed the packed court justice are like dummies who are under FDR’s control. They can’t speak for themselves but speak for FDR when they all say ” Yes, Yes, Yes, we all vote yes!” in front of uncle Sam. It shows how FDR used America government system well to support his New Deal plan. He wanted to make sure that all his acts can be carried out to help the poor effectively.