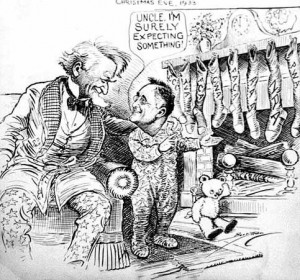 The artist was trying to convey the message that FDR wanted to get many different things done in a short period of time.  He also leans toward the idea that it isn’t possible to get such a massive amount of relief and legislation passed that quickly. In order for it to be done you would need “magic” or some other worldly force.  This is shown by the iconic image of a child putting out a stocking over the fireplace at Christmas in the hopes for some treat to be delivered by Santa overnight.  On the stockings themselves, are many different agencies that FDR created to provide jobs, such as the: CCC, TVA, FCA, TWA etc.  It can be interpreted that these programs were the primary ideas to get America back on its feet.  The “gifts” that would be received would hopefully make everything return to normal, and get America back to its former glory. FDR is the child and he seems to be reassuring “Uncle Sam” that everything will be okay in the end because his New Deal will work.