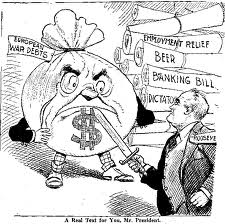 The country was facing an economic depression and they needed to be saved from the failed national policies attempted during the Hoover administration. As if things could not get worse, three weeks into taking office, the country was hit with a banking crisis. People raced to the banks to withdraw money and slowly banks were running out of money! A national bank holiday was declared and all banks were closed to be examined. Only the financially sound banks were given money by the government to reopen.

In order to aid citizens in this time of distress, FDR implemented the New Deal. This created jobs for people building city/state infrastructure. Soon the country would get back on its two feet. In addition, a new program called Social Security helped people in old age. This program yielded benefits after retirement. Last but not least, who can forget the discomfort many Americans experienced under prohibition. Soon after taking office FDR made a beer with a low concentration of alcohol accessible and legal.