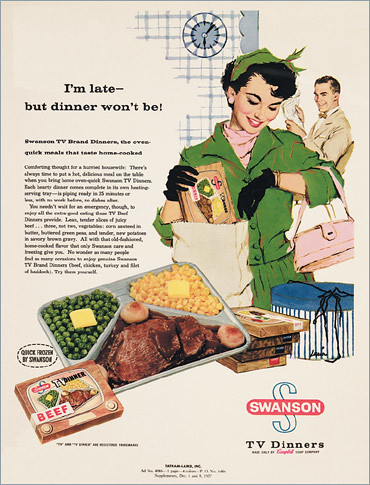 With the rise of television, Americans changed their eating habits from home cooked meals to convenient TV Dinners. In 1954, Swanson introduced TV dinners that were packaged to mirrored the look of a television set, selling over 25 million dinners within their first year. As the ad suggests, it is an “oven-quick meal that taste home cooked.”  The convenience of these TV dinners attracted many Americans, creating a societal norm where Americans leisurely heat up the TV dinners and eat it while watching  TV. This common behavior became a cultural experience that all Americans across the states can share.

Below is a Swanson TV commercial: