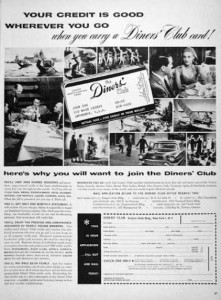 During the affluent society, Americans were feeling rich and wealthy. The introduction of credit card had changed everything. Americans can now use credit card to purchase cars, home,television and many accessories. Cars were a major factor in American life especially during the 1950s when president Eisenhower built interstate highway which made transportation easier. Credit card can make purchase so much easier that Americans can just swipe the card and buy the stuff they need or they want. They can live with buy now and pay later. It seems like Americans are are living with wealth. The power to purchase improved America’s economy and introduction of the credit card definitely played a major role in such improvement.