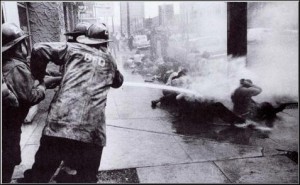 During the 1960’s, there was a firm desire for  gaining equal rights for African Americans. This desire was sparked by the movements made in the 1950’s where many civil rights activist were able to abolish many forms of segregation such as in public schools in the case of Brown V. The Board of Education and public transportationin the case of the The Montgomery bus boycott. Although progress was made on equal rights during the 1950s, not much has changed in society seeing as segregation still existed in bussiness and there were still only a handfull of Colored students enrolled in previously all-white schools.

The forms of protest performed by activists were mainly passive. Even while facing the harsh riots of Birmingham, Alabama, Colored students marched in the streets while being assulted by the local athorities. The atrosities commited in the Birmingham incident were broadcasted and raised awareness of the brutal actions taken towards protesters. After the Birmingham incident became publicaly known, actions were taken to quell the riots and established desegregation in the local bussiness.