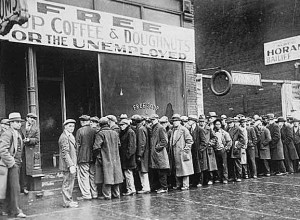 These two pictures above discussed the time of the great depression when everyone was being laid off and unemployment was high.

The Great Depression timeline is a dramatic turn in our history and unfortunate events that took place in American economic history. The starting point was when there was a crash in the stock market in 1929. Three years after the stock market crashed in the New York stock exchange, the stock prices continued to decline till about the latter half of 1932. Later on the Industrial Revolution also played a big role in the development of this economic fall in parts of the  great depression timeline. More machines were invited and there were smaller groups of workers. These smaller group of workers, didn’t help the machines and the economy from producing because their was less products being reproduced to make money. At this point, a lot of machines were being used as well as equipment leading a lot of lay off for people.