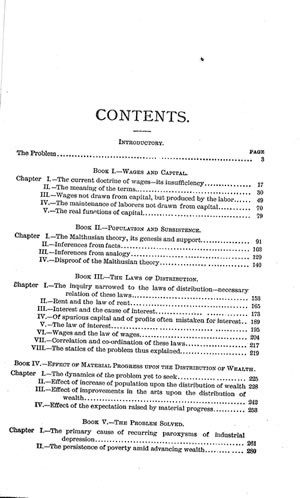 Progress and Poverty by Henry George was published in 1879. It brought to light the economic conditions that existed in the Gilded Age. The Gilded Age was supposed to be a time of economic growth and reform for everyone in the nation once the Civil War was over. However, this was not the case and many were unsatisfied and unhappy with the economic situation; Henry George was one of these people.

In this book, Henry George not only brought attention to the unequal distribution of wealth during the time, but also proposed his own ideas and methods for a solution to this inequality. He was not the only one to create such a publication. During the time, there were many who were unsatisfied with the unequal distribution of wealth and had their own unique ideas on ways to fix the problem. However, Progress and Poverty received much public attention because of the fact that his explanations of the current economic situation were clearer than others and also because many agreed with his ideology that the current economic situation was one that should have been left in the times before the war ended.