For my extra credit I visited the African Burial Ground. 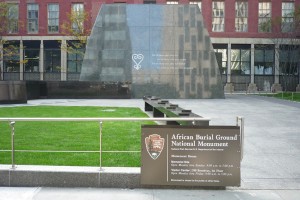 This is a picture of one of the graves. 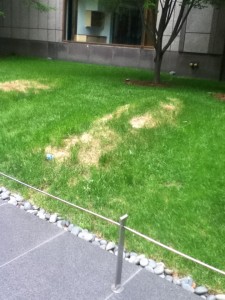 This picture is a sample of the boxes that the bones found were buried in. This box was a mini original made in Ghana (I think! I didn’t take notes on the box :/) 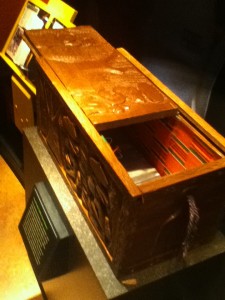 It is a pretty cool place although it is not very big it also included a mini musuem. My friend and I had a lot of fun with all of the interactive activities that they had inside of the museum. My favorite activity was “Record Your Own Experience”. “Record Your Own Experience” allows you to share your museum experience through different questions that you could record your response to.  Here’s a picture of My friend Daniel and I recording what we will say to a slave if one of them were to come back alive. 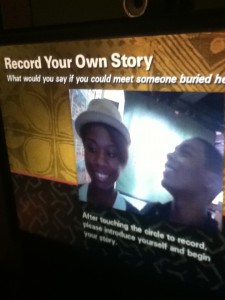 It is free ! There is a suggestion box but you don’t have to put anything in there. Spend an hour with a group of friends and learn about our African ancestors. It’s an experience you won’t regret. 🙂 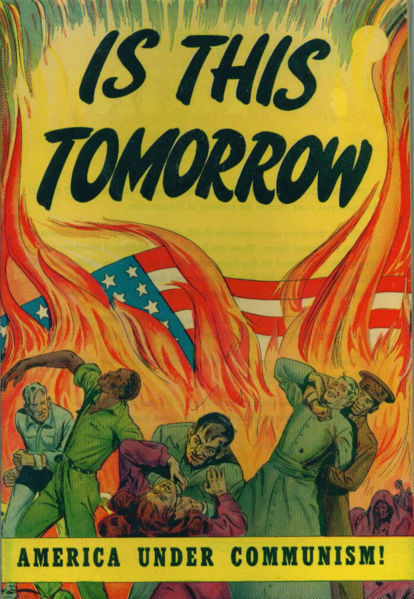 In this political cartoon, there are three important figures: President Franklin D. Roosevelt, Congress, and Uncle Sam. Each of them assumes a role in the cartoon, with FDR as the doctor, Congress as the caretaker, and Uncle Sam as the patient. Uncle Sam represents a sickly America. FDR is the doctor, who has the responsibility to cure or relieve the symptoms of the depression that struck America and its people.  FDR gives Uncle Sam many different kinds of “medicine,” including programs like the National Industry Recovery Act, the Civil Works Administration, and the Agricultural Adjustment Act. In addition, FDR is carrying a bag of New Deal “remedies,” which can provide even more relief for America. FDR reassures Congress that the “remedies” do not necessarily guarantee success and changes can be made.

At the time, FDR approved and passed many legislations, in hopes to fix America. Many people were doubting whether these programs would actually help or even make things worst. This political cartoon supports FDR and his policies and puts the New Deal in a positive light. This is because Uncle Sam is shown to be in good spirits, after trying the New Deal medicines. Additionally, the cartoon depicts FDR as a man, who is understanding because he knows that the programs might not work and has a bag of solutions prepared. 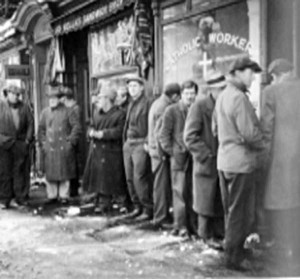 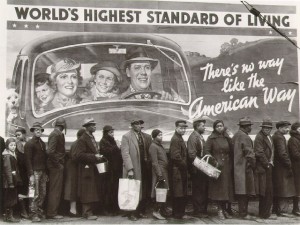 The breadlines during the Great Depression are some of the most symbolic characteristics of the Great Depression. The breadlines were unusually long and crowded, despite of the fact that the agency were providing little bread to each individuals. Although most of people on the breadline were capable laborers, the lack of employment opportunities made them unable to make any production and forced them to wait on a crowded line for most of the day-time. It was quite tragic, since many capable workers were forced to accept the little ration provided by the government. Certain city folks found it unbearable and relocated themselves to rural areas to farm, in hope of using their labor to produce actual food.

The two images above are illustrations of the long, crowded breadlines during the Great Depression. The first picture depicts the breadline on a cold day, in which many people wear wearing heavy jackets and hiding their hands in the pockets. They have no other choice other than waiting there. They could not produce food in the city (or not fast enough, since growing vegetation in the backyard cannot guarantee a stable food source),  so they had no choice but to accept their only stable source of food. On the other hand, the second picture portrays the irony of America’s economics collapse. Just several years ago, the Americans were celebrating the lavish lifestyle and liberal behaviors of the Roaring Twenties; however, by the time of the depression, Americans no longer had the money and leisure to enjoy their freedom and the world’s highest standard of living. Nothing remained but the ad board, which ironically depicted their faded prosperity during the age of wide-scale poverty. 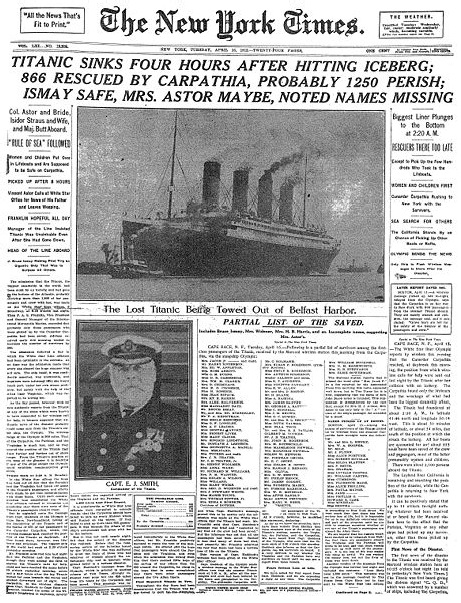 The landing of the moon signified America’s triumph over the Soviet Union during the Cold War.