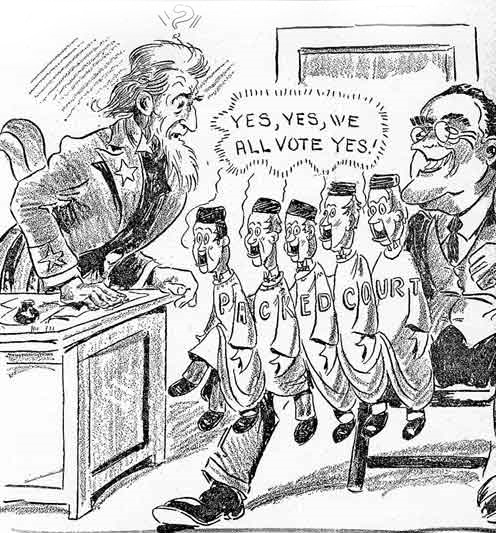 Political cartoon with the caption 'Do We Want A Ventriloquist Act In The Supreme Court?' The cartoon, a criticism of FDR's New Deal, depicts President Franklin D. Roosevelt with six new judges likely to be FDR puppets. USA, 14 February 1937.

This political cartoon was posted on February 1937 and photoed by Fotosearch. The political cartoon is talking about “court-packing plan” during the new deal. This plan is to give the President power to appoint an additional Justice of maximum six to the U.S. Supreme Court because during Roosevelt’s first term the Supreme Court struck down several his new deal and he felt a threat from the Supreme Court. Therefore, he appointed six justices who were pro to him. However, public and house’s reaction became opposite about his new deal and they thought that FDR was too communist and wanted to gain his power.