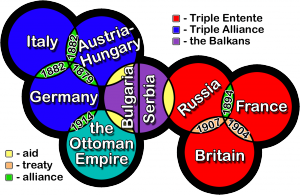 Prior to WWI many new alliances and nations were competing to be the new world power. Power came with additional influence on territories outside of your own. The European influence and stream of expansion began in Asia and Africa long before the war, but this is probably one of the many other ways in which the countries competed for and maintained their status on a world platform. An additional cause may also be militarism. Power is also symbolized through the means of weapons and military strength a nation has. The arms race was one which was long and spread wide influenced competition between countries like Russia and Germany.

Lastly, nationalism always fuels wars. Each nation is fighting for the prestige and individual interest of their nation. The same holds true for WWI. Dominance and power can only be won through maintaining standards that boost of a nation’s capability, Europe fell victim to this epidemic as well.