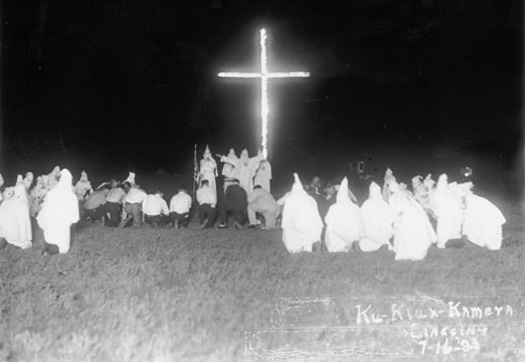 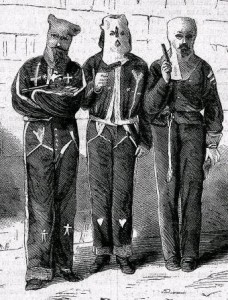 In 1865, American Civil War has ended, but the racial war has just started a new chapter.  Although the nation is once again unified, but the difference between racial perspective hasn’t been changed until many years later.  The lost of war did not make southerners give up their believe in slavery.  Many veterans of Confederate Army have organized and committed brutal crimes against white and racial republicans.  Although Ku Klux Klan is organized originally at local area, many other groups across the southern states have adopted the name.  The image above shows three members of Ku Klux Klan under arrest at Tishomingo county, Mississippi on September 1871 for attempt murdering a family.  In 1870, Government passed Force Act to fight the crimes and place soldiers to protect racial republicans and peoples. 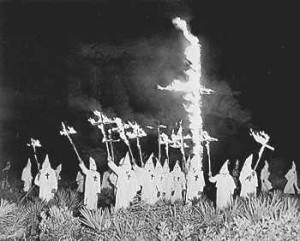 This picture above shows a gathering of KKK members Gainesville, Florida at December 31, 1922.  With Government’s involvement, the scale of Ku Klux Klan gets smaller as more members of KKK is prosecuted under the law.  In 1920s, KKK re-emerges when racial conflicts is incorporated with religious conflicts.  The member of KKK become more organized and openly practiced.  The Klan fades away at 1940s because of criminal acts committed by the head of the organizers. 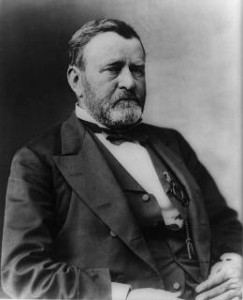 During the reconstruction period after the civil war was resolved, there was still turmoil in the south. Many white southerners were unwilling to accept the new government for reasons such as rise in taxes to improve the construction of railroads and schools but the chief reason of discontent in the south is that the southerners could not tolerate the civil rights act of 1866 which allowed males to vote despite their previous background. In response to the civil rights act of 1866, white southerners who opposed the ideas of the new government formed a secret organization known as the Ku Klux Klan. The main goal of the Ku Klux Klan was to prevent blacks from voting by harassing the blacks in their community and often time’s murdering them in order to cause a scare.

In order to counter the actions of the Ku Klux Klan, the Civil Rights act of 1871 was enacted by President Ulysses Grant. With this act in power, federal troops were sent to the south to protect blacks from being harassed or assaulted by secret organizations such as the Ku Klux Klan. During this time many members of the Ku Klux Klan were arrested and were put on trial for the atrocities they have committed.