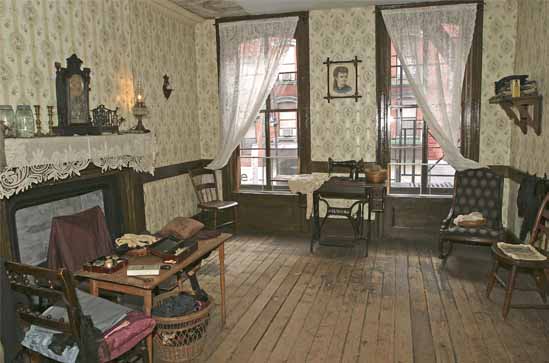 When stepping foot into the Tenement Museum, one feels as if he was going back to his roots. He first realizes the condition of living that many new immigrants faced, and he learns the struggles that people fought through, just to live in America. During the 1800’s and early 1900’s many immigrants came to America to seek prosperity or refuge. These immigrants were usually Eastern European Jews, Italians, or Greeks. Each ethnicity tended to live near themselves, and they formed their own neighborhoods. In these neighborhoods people of common ethnicities would help support each other, give each other jobs, and give each other advice on the new country.

While walking into the museum I realized the horrible conditions that many of these new immigrants had faced while coming to America. They usually came with no money, and were forced to squeeze up to 10 people in rooms, which barely fit 2 people. These immigrants fought hard to stay in this land, something we take for granted. I specifically went to one room owned by a Jewish family, and one owned by an Italian family. We learnt how each family learned to survive. Usually the women had to take care of the house and make money, because the families were too poor to survive any other way. In addition, many children had to work as well, because the extra money was desperately needed.

While walking through the museum it is clear that these immigrants worked really hard. They helped start a new life for their families, and in turn sacrificed their lives to working extremely hard. It is highly recommended that everybody visit this museum. It helps show the roots of many of us, and will help put our lives in perspective. It will show us how lucky we truly are, and just how much we should appreciate the lives that we have.

The “Getting By” tour takes you through a typical day in the life of two families that lived at different times in the tenements at 97 Orchard Street. The building that I walked through was very dark with narrow hallways. The walls were lined with potato sacks and the ceiling was made of aluminum. There were paintings on the walls and it had a wooden banister. From downstairs it seemed like a regular apartment building that just needed some better lighting and a good cleaning. But once I went upstairs, I got the chance to step back in time and see how the tenants really lived. The quarters were tight and the views were nonexistent. The families had no privacy, and the children had nowhere to play. The tenements were by no means suitable living conditions, but they were in America – and to the residents of Manhattan’s poverty stricken, disease ridden, over populated Lower East Side, that meant that there was chance for a batter life. A chance that simply was not possible where they came from. 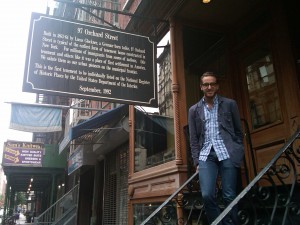 I’ve actually visited this museum on more than one occasion, once in elementary school, again in my first year of college for a sociology paper, and them a third time for this class. I chose to visit the tenement museum again for this assignment rather than one of the other sites in NYC with historic significance because I thought it would be a good idea for my 12 year old sister to get a look at how difficult the conditions were that our grandparents had to endure when they first came to this country to give us the opportunities that we now have in front of us. I think it would be a great idea for anyone who hasn’t been there to make it a point to get there at some point – I think you’ll  all really appreciate it.