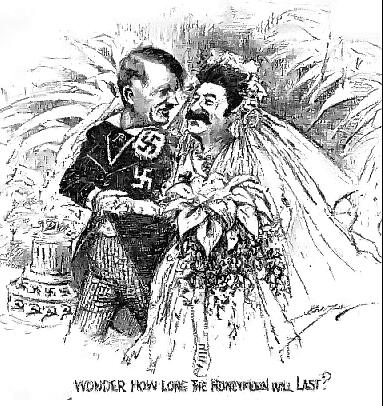 The caption reads, “Wonder how long the honeymoon will last.”  This phrase is to relate to the non ‘aggression pact’ (Nazi- Pact 1939) signed by Hitler and Stalin.  The Soviet Union agreed to provide raw materials and food products to Germany in exchange for furnished products (such as machinery) from the Germans.  In addition to these arrangements, there was an alliance not to attack each other.   The pact was supposed to last for ten years however, it was only upheld for two.