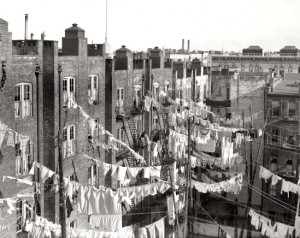 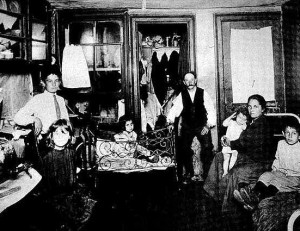 These images show how the typical immigrant lived in New York City in the early 1900’s.  The first photo depicts how tenement life worked in the 1900’s.  It shows a crowded community in a very small area.  It also gives you the idea of a relative sense of community, after all the strings the clothes hang on do connect to other strings.  It can be a place to talk to your neighbors from each others windows and it seems to be a bright spot in a struggling immigrant’s life. People from many backgrounds all met in these areas and since they all lived in these same conditions they formed bonds with each other.   The second photo was taken by renowned photographer Jacob Riss and is a more dreary and accurate portrayal of immigrant life.  Entire families were packed into a single room, and that room was called their home.  These rooms were generally decrepit, cramped and full of chemicals that today are deemed extremely hazardous to health.  Families would often work out of these shoebox sized rooms; doing things such as tailoring and shoe-making.  It was a very tough life to live, but to them it was the only way to survive.