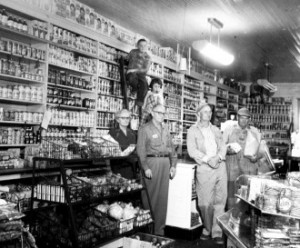 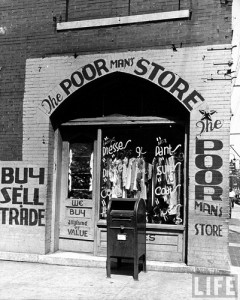 The Great Depression scared all, including the rich. The Stock Market crash and other economic struggles forced Americans to stop purchasing! This in result led to much less production of goods and directly decreased the amount of human labor needed. People continued to loose their jobs and used places like “The POOR MAN’S STORE” as their last resort for trading, buying and selling what goods they did or did not need. On the contrary the first picture on the left, represents a normal environment inside of a store before all economic hell breaks out. Once people begin to refrain from buying because of a shortage of jobs and income, even those people who bought items on installment plans are unable to pay their dues and stores are forced to stock up on inventory: thus putting store owners to a loss.