With only a few victories in the civil rights movement, African Americans began their journey to fix economic problems in the black community. With nearly twice as many African Americans unemployed as whites, and the average black family income slightly over half the white norm, Leaders like MLK attempted to solve economic hardships. King had proposed the Bill of Rights for the Disadvantaged, which was aimed at poverty in the country. King had argued it was time for the government to step in to do something special for black people after they had suffered hundreds of years of hardship. This bill later became associated with affirmative action which calls for the consideration of race, color, religion and gender in the field of employment to give an equal opportunity to underrepresented groups. In 1966, MLK started the Chicago Freedom Movement to end further discrimination in employment, mortgages accessibility, public homes and low income housing. King had used previous methods to lead the movement but eventually failed because of the heavy opposition from white home owners.
04/19/11

According to Foner, during Johnson presidency he took initiatives of 1965-1967,  known collectively as the Great Society, provided health services to the poor and elderly in the new Medicaid and Medicare programs and poured federal funds into education and urban development. Unlike the New Deal the Great Society was a response to great prosperity. The mid-1960’s were a time of economic expansion and Johnson thought that economic growth will help improve the quality of life.
Great Society centerpiece was Johnson’s response to poverty, he tried to eradicate it. According to Michael Harrington’s book The Other America around 40 to 50 million Americans lived in poverty. This alerted political leaders to take action in stopping poverty. The War on Poverty didn’t directly eliminate poverty Johnson concentrated on equipping the poor with skills to help themselves. The new Office of Economic Opportunity provided job training, legal service, and scholarship for poor college students. The War on Poverty didn’t really eradicate poverty it helped empower the poor to take control of their lives.

Many say it all started with the stock market crash of 1929, but there were so many other factor that contributed to the Greatest Depression the world has seen.  Was it the bank, lack of international trade, was it capitalism.  Something was definitely unbalanced, and led to extreme poverty. 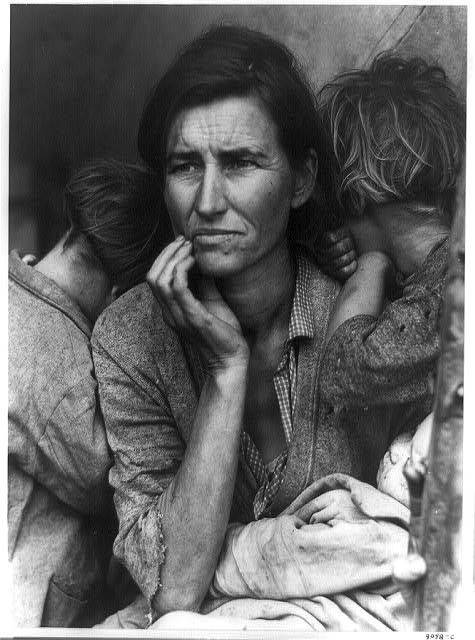 When ever I think about the depression, and even during my research of photographs, the picture above seems to carry the greatest effect on me. This woman is carrying her two small children, and a look of pure sadness and lost that one just can’t fake.  She looks poor, and while doing some research found that she had 7 children traveling and looking for work. That’s a lot of mouths to feed.  I can’t imagine how hard that was.  At least now, there are government supports and aids for some of the poor.

I close these two photographs to show how on the large scale of things, that many things may have been responsible for the Great depression, but at the end of the day, many families suffered for it.  The hardship was real even if the real reason isn’t quite clear.

This is a "town" of shacks in Central Park, called a Hooverville. (From http://ephemeralnewyork.files.wordpress.com/2008/10/centralparkhooverv.jpg)

This is a “town” of shacks in Central Park, called a Hooverville. (From http://ephemeralnewyork.files.wordpress.com/2008/10/centralparkhooverv.jpg)

During The Great Depression conditions in America were horrible. Now, I know we think we had it bad the past few years, but that does not even compare to how bad it was in the early 20th century. Most people had no work. Now, I am not strictly talking about unskilled workers, but rather many professionals did not have work as well. Everyone was looking for jobs and nobody was able to support their family. In order to even attain some food people would wait on these breadlines. The lines were hundreds, or thousands, of people lined up waiting to get a small portion of food given out for free. This is what a majority of America had to resort too. People couldn’t afford housing either. Some lived in cardboard boxes. and others lived in houses that were not much better. Shown in the picture is a village of tiny, dinky shacks that was set up in New York’s Central Park. While nearly impossible, I hope the two pictures that I posted give you an idea of the poverty present in The Great Depression.

This is a breadline where people can come and get free food. (From http://dailycapitalist.com/2009/06/24/the-great-depression-a-short-history/)

This is a breadline where people can come and get free food. (From http://dailycapitalist.com/2009/06/24/the-great-depression-a-short-history/)