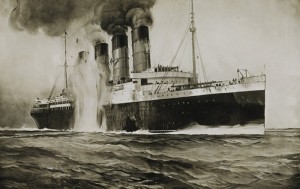 During the early stage of world war I, America was in a tight tension with Germany because of the Zimmerman Telegram that Germany sent to Mexico which got intercepted by US and decoded. The telegram asked Mexico to be allies with Germany so that when they win the war, Germany promise to give back the land that US took from Mexico such as Texas and arizona, back to Mexico. US were already in favor of the Great British and France so Germany had reason to go against USA. The sinking of the Lusitania was the on of the major sparks that gave American the reason to declare war on Germany because the ship was meant to carry passengers from New York to Britain, but Germany’s U boat nevertheless decided to sunk the ship down that gave the US determination to get involved in this overseas war.