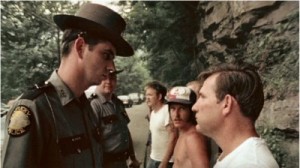 Harlan County’s Sheriffs Department played a role throughout the documentary, Harlan County, USA; however they did not seem to defend the mine workers and their families from the evil companies.  It is understood they were merely doing their jobs when they had to keep the roads open from the picket lines preventing the scabs from taking the striking miners’ jobs.  The relationship between the police and the miners  got out of hand when the picket lines and the police offers clashed.  The police are suppose to protect the good from evil and uphold the law.  Unfortunately, the police were not their to defend the workers from the thugs of the companies who used intimidation tactics to break the picket lines up. The police were not present when the thugs were intimidating the striking miners.  They could have prevented the murder of the young miner who was taken away from his family and community at such a young age.  His death brought victory for the striking miner’s and they won their contract they wanted.