Some areas of interest for me from both surveys include:

Last week’s readings included the global strategic plan for Baruch College, this week we are given access to the strategic plans for Middlesex Community College and Ohio University. By comparison the Baruch plan seems to be a 1st draft of what a global strategic plan should entail. It is missing many of the elements that are in the plans for the other colleges. Ohio University and Middlesex are using the Global Learning Value Rubric established by the Association of American Colleges and Universities.  The rubric has six areas of competencies that can be used when trying to determine if a curriculum promotes global learning. Both institution state the importance of having a global strategy and they break down how they plan on achieving their goals.  The Middlesex plan provides the most detail about the their plans and as well as how they want to go about achieving their goals. Baruch should look to the Middlesex plan as a blueprint of what their plan should look like.

The Middlesex plan includes having all students who participated in study abroad attend a Global Engagement Workshop, which is “designed to help them craft their study abroad experiences into informal and formal narrative presentations” . This stood out to me because as we have discussed in class, some of the benefits/goals of studying abroad is developing “soft skills”; participating in the Global Engagement Workshop would allow students that opportunity to learn how to describe their experiences abroad including all the skills they have acquired. The Ohio University plan for global strategy and internationalization states that it is still in the stages of completing a “workable” plan. The framework that they have in place to create a solid global strategic plan is very through; I am assuming that future drafts and the final plan will include substantial and solid ways in which the university plans on implementing their plans.

One aspect of the Baruch Global Strategic Plan that both Middlesex and Ohio, could incorporate into their plans is the section detailing the countries they are targeting in regards to student and faculty mobility.  By providing this information, you can get a look at the direction in which the institutions are going with regards to outreach, some of the places that are worth consideration are discussed in the 3rd reading for this week. That reading looks into BRIC institutions, which is an acronym for Brazil, Russia, India and China. BRIC is an  an association of four major emerging national economies. As of 2010, South Africa joined BRIC. The reading focused on the changes that are taking place at BRIC universities and to what extent the state (government) is involved in these changes. While looking further into BRICS, I discovered that the the member countries and in the process of creating a global university. BRICS Network University will be based in Russia, it is “a joint educational project aimed at creating a common educational space, developing academic mobility and providing the BRICS economies with highly professional personnel in energy, economy, informatics, ecology and other areas.” Based off the article we read for class, I am interested in seeing how the network university would work since many of the member countries are to varying degrees are involved with higher education specifically the financial end of the institutions.

This week’s hot button issue of funding concerns for CUNY brings to the front increasing pressure from policy-makers about the efficiency and effectiveness. This directly resonates with the OECD’s The State of Higher Education report . It notes “From an institutional perspective, HEIs are under pressure to become more effective and efficient across all of their missions – teaching, research and innovation and local economic development. Yet, many face financial challenges that threaten their long-term sustainability.” 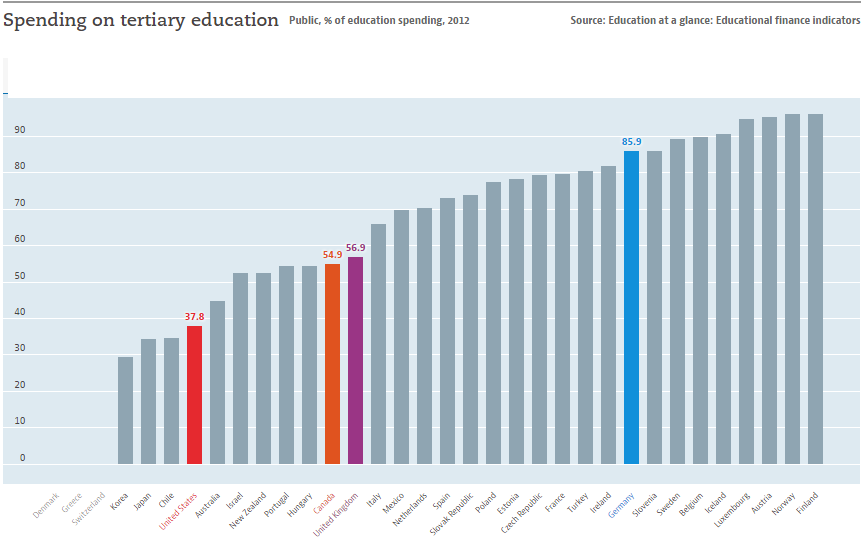 The chart illustrates that the United States spends significantly less in through public resources as compared to countries like Germany, United Kingdom and Canada. At this lower level of public investment, the increasing cost pressures are resulting in students picking up more burden of cost of college education through increased tuition.

Here is an important footnote from OECD chart: “Spending on tertiary education is defined as the total expenditure on the highest level of education, covering private expenditure on schools, universities, and other private institutions delivering or supporting educational services. The measure is a percentage of total education spending. At the tertiary level educational institutions in OECD countries are mainly publicly funded, although there are substantial and growing levels of private funding.“ 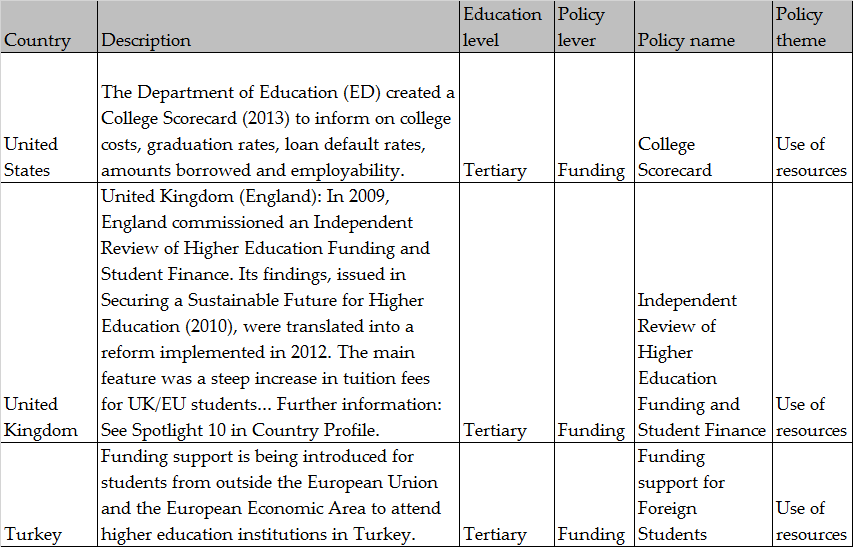 Funding reforms are only one of the six policy levers. Successful policy planning and implementation requires alignment of careful mix of various levers to achieve optimum output.

These points stood out to me because they illustrate that internationalizing in the U.S. is different from the programs and policies that are in place across the world.

The lack of a cohesive and comprehensive plan for the internationalization of U.S. higher education demonstrates the lack of cohesive direction of higher education in America. As the authors note, unlike other countries the United States does not have a government agency that is dedicated to higher education. Within the U.S. Department of Education, is the Office of Post-Secondary Education (OPE) that “works to strengthen the capacity of colleges and universities to promote reform, innovation and improvement in postsecondary education, promote and expand access to postsecondary education and increase college completion rates for America’s students, and broaden global competencies that drive the economic success and competitiveness of our Nation.” I was unable to locate information on the government appropriations for the OPE, but I believe it is safe to assume that the funding is minimally when compared to their global counterparts.

Government discussion on higher education is usually in the context of federal aid (grants and loans). Legislation that is passed that would promote internationalization of U.S. higher education focuses on programs and policies that are believed to support national security and the economy. The Senator Paul Simon Study Abroad Foundation Act of 2007 was sponsored by Senator Richard Durbin and Representative Tom Lantos, the stated intentions of the bill don’t seem to align with the rational/motivations of legislative mandates of programs and policies that have gotten congressional support and approval. This maybe one of the reasons as to why the bill as not been enacted or is not a focus for Congress.

The report suggests that a comprehensive national policy on internationalizing U.S. higher education is not possible due to the systems and structures of the government and higher education institutions. Instead of a national policy “a broad, well-coordinated set of well-funded initiatives that support comprehensive internationalization” should be implemented. Any initiative that is put into place should come from a policy that lays out the expected goals, outcomes a rationales of internationalization U.S. higher education. Having an overreaching policy provides guidance. Instead of working with the federal government, state governments could be used as a vehicle to put into place policies to internationalize higher education that can be implemented by colleges and universities that meet certain criteria. Most states have some sort of standalone agency/department that focuses on the governing of higher education, these departments could be charged with implanting policies that are passed by the state legislatures.

It is important to point out that for any government state or federal to take an interest in the importance of internationalization of higher education, the officials have to understand how and why this topic is important to them and their constituents. Making higher education institutions global competitive is a good basis’s for providing an explanation, as we already know as Mr. Trump has said we need to make America great again.

There were a few topics that sparked my interest in this weeks reading. The first was harmonization. As we spoke in class and in the blog, countries are currently having problems uniting themselves to in fact wish for a national harmonization is very difficult. The harmonization they spoke about was in regards to international academic calendars and degree/credit transfers. With my position as an admissions counselor I constantly see students with international credits and degrees and many times we do not accept all credits or the degrees they received do not allow them to continue a masters or doctorate here. There are even times where the high school diploma is not sufficient and we will ask them to take a GED. I do believe the education hubs play a role in this. Some mentioned there education hubs were cities like in Ecuador with the Yachay City of Knowledge and others were schoolhouses within institutions like Singapore. With an eventual minimum qualification for what is considered high school equivalent and bachelors equivalent the harmonization could be a possibility for students to not loose years in university when transferring between countries. On the policy side, many students who come to New York with a degree are not able to receive the PELL or TAP grants because it is for those students seeking degree for the first time. This information is available to international students but is not well known and normally these students find out at the bursars office after they have been accepted and registered for classes.

It has always been know that the United States is a “melting pot” for different cultures but when it comes to higher education we are the only one’s with HBCU’s and Hispanic-serving institutions. When speaking about policy the U.S. really emphasizes that the wish to bring internationalization to these institutions but all the other countries mention policies they wish to implement across the board. I wonder how HBCU;s and Hispanic-serving institutions will play a role in the internationalizing of education and if it will thrive in institutions like this where the majority of the students have roots that are international already. Are we really the only country that has certain institutions that are under served? Or are we the only ones who care?

Lastly, policy effectiveness relies heavily on institutional research. With the correct collection of data and analysis policy can be most effective, but funding as mentioned in the article is a problem for some countries. In order to collect the correct data and have the tools to analyze and asses within the years to come if the policy is effective will take large amounts of monetary funds. Being in compliance with state and government regulations too can hinder policy, so even if the institution wishes to move towards internationalization they are unable to. This brings up the point of safety with internationalization, are we brining in danger with opening our doors to institutions around the world?