Nearly 90 years ago, the National Institute of Public Administration (as it was then known, later just the IPA) studied the police departments of St. Louis, Kansas City and St. Joseph as part of a survey of crime in Missouri. Ferguson, then an obscure rail stop of several thousand mostly white inhabitants just outside St. Louis, rated no mention. 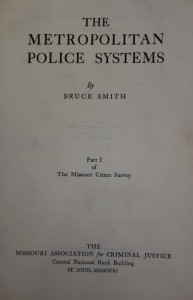 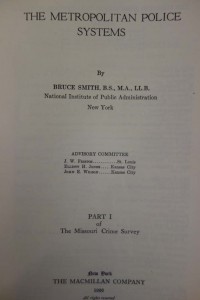 But parts of the study, led by the IPA’s redoubtable police expert Bruce Smith, shed an interesting light on historic attitudes and issues now that Ferguson has crystallized a national debate over race and policing in 21st century America.

Back in 1925, when the survey was undertaken, St. Louis had the highest homicide rate among major US cities — 16.3 per 100,000 people, or almost three times the rate of New York and double the national urban average. (At the time, St. Louis ranked sixth in population.)

More than Kansas City and St. Joseph, Smith wrote, St. Louis “is burdened with that heterogeneity of population to which is commonly ascribed the high crime rate of American cities.”  (Was that another way of saying it had the misfortune of being a melting pot and thus supposedly more susceptible to lawbreaking?) 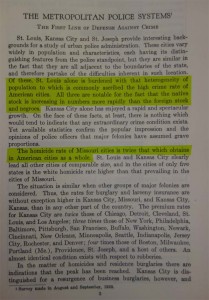 But population patterns were shifting, Smith noted: “All three are notable for the fact that the native stock is increasing in numbers more rapidly than the foreign stock and negroes.”

That said, policing was in a sorry state in St. Louis and the other cities, Smith concluded. The standards for becoming, and remaining, an officer of the law were abysmal. Men were fired for “abuse of authority” or “conduct unbecoming an officer” only to be quickly rehired, usually on the strength of political connections. Recruits were often middle-aged or old — ne’er do wells who had washed out of other jobs. Chiefs similarly owed their positions to politics, and were swept out with each change of administration. And all policing was a state-controlled function, shredding notions of local accountability.

The Missouri Association for Criminal Justice, which commissioned the study, endorsed its findings. 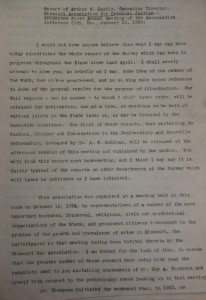 In its own report on the report, Arthur V. Lashly, the association’s operating director, noted grimly that killers in St. Louis stood only a 1-in-6 chance of being punished. Burglars enjoyed even better odds: 24 out of 25 went free. 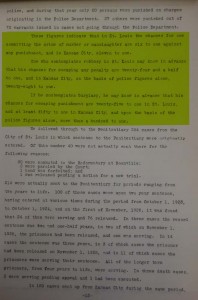 St. Louis alone among the major Missouri cities — at the legislature’s behest –still relied on the discredited Bertillion method of criminal identification: taking facial characteristics as telltale signs of outlaw classification and propensities. Elsewhere, police departments were turning to the modern science of fingerprints. 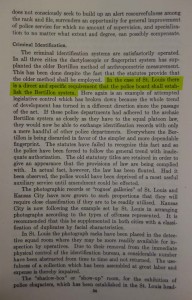 Most interesting — now that a white Ferguson officer, Darren Wilson, has escaped indictment for the killing of an unarmed black teenager, Michael Brown — is Lashly’s lament for the demise of Missouri’s grand jury system. It was “rapidly falling into disuse,” he wrote, “but the extent of its abandonment as the primary agency of prosecution has not been suspected.”

As he noted, a 1900 amendment to the Missouri state constitution gave prosecutors the right to bypass the grand jury and file what are known as “informations” instead. 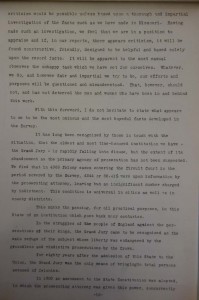 This allowed prosecutors not only to charge people without the protective step of presenting evidence to a grand jury “or refuse to begin them, but to stop prosecutions, even when begun by the Grand Jury, without giving any reasons for the action. and whether the Court consents to it or not.” 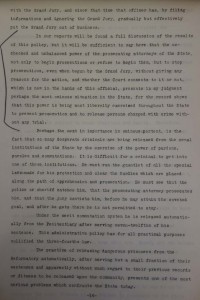 That wasn’t the issue in Ferguson this time — the prosecutor did submit evidence to a grand jury. But as more than a few critics saw it, the case seemed handled in a way calculated to insure that Officer Wilson walked free.