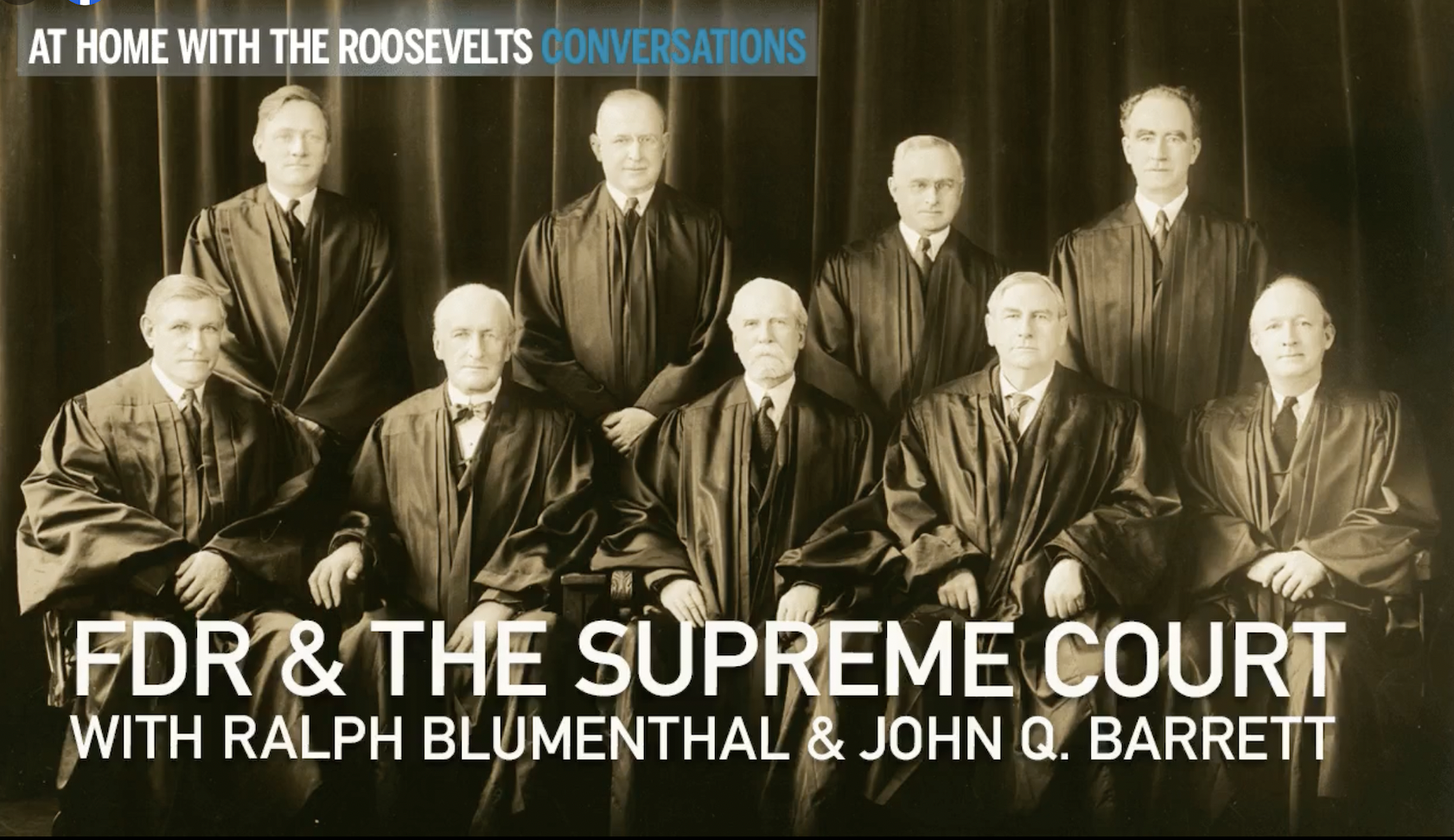 The Supreme Court that President Roosevelt failed to pack with 6 additions in 1937, Chief Justice Charles Evans Hughes, center front. It was FDR’s worst defeat but he salvaged a victory when the Court started upholding New Deal programs.

On Friday, Sept. 17, 2021, the Franklin Delano Roosevelt Presidential Library and Museum in Hyde Park, N.Y., sponsored a virtual forum on FDR and the Supreme Court, notably the court-packing fiasco, with Prof. John Q. Barrett of St. John’s Law School, and me, representing Baruch and our Newman Library Archives collection on Luther Gulick and his Institute of Public Administration.

You can watch it here:

So where do we — Baruch College — fit in?

In the machinations behind the court fight, one of the conservative Justices, Willis  Van Devanter, a Taft appointee, retired after 26 years on June 2, 1937, opening the way for a Roosevelt pick. Roosevelt was pressed to name his loyal ally, Arkansas Senator and Democratic Majority Leader Joseph Taylor Robinson (here with the First Couple enroute to the first term Inauguration, 1933). 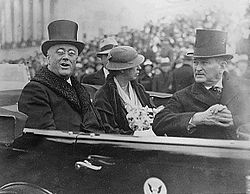 But Roosevelt dragged his feet on the appointment, partly out of fear that, given a lifetime appointment, the Southerner might join the conservative bloc and turn against the New Deal. Yet Robinson had worked himself literally to death for the President’s court bill — collapsing and dying on July 14, 1937, a week before the ill-fated legislation he was championing.

And then who was there in Little Rock to escort Robinson’s body off the funeral train but one of his two closest friends — Bernard Baruch!

The anecdote is aired in a masterful contemporaneous (1938) account of the court battle, “The 168 Days” by Turner Catledge and Joseph Alsop. 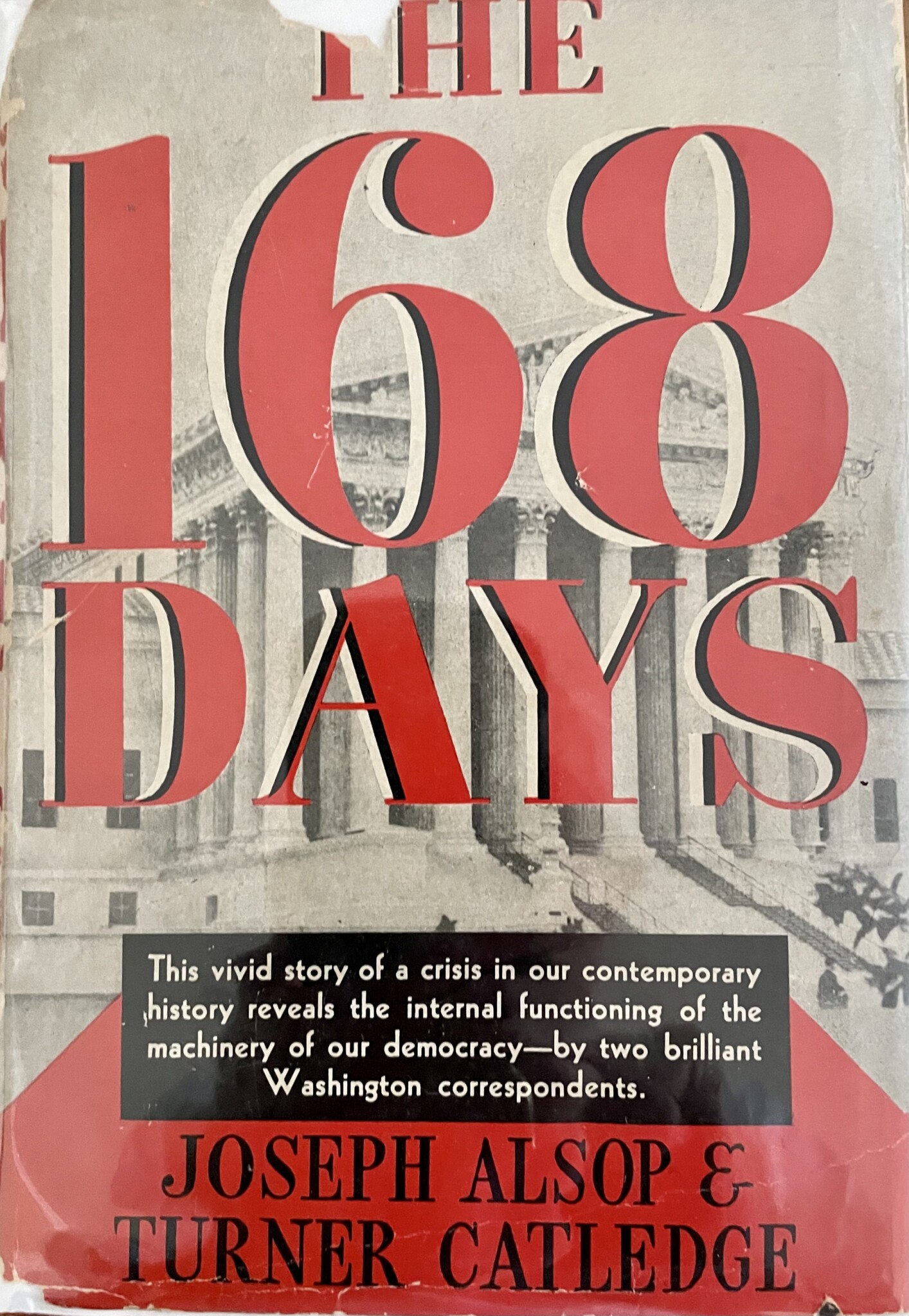 Catledge was the Times correspondent covering the court controversy (and managing editor when I joined the paper in 1964.) Alsop was a staff reporter at the New York Herald Tribune, magazine journalist and syndicated columnist and, with his brother, Stewart, related to the Roosevelt family — their mother, Corinne Robinson Alsop, was a first cousin of Theodore Roosevelt’s niece Eleanor, Franklin’s wife.

Baruch College also crops up in the court saga via the Gulick Papers in our Library Archives.

The packing controversy blew up just as Gulick and his two colleagues Louis Brownlow and Charles Merriam were struggling to reorganize the executive branch in the biggest restructuring of the federal government since 1787, producing the potent modern presidency.

The Secret Science of Government Reform

The court battle distracted Roosevelt, so the White House reorganization — roundly opposed by Congress already up in arms over the packing uproar — didn’t go through until 1939. (We have a ceremonial signing pen FDR presented Gulick.)

The New York Times was deeply interested in the executive reorganization, as evidenced by this letter from John H. Crider, an assistant to Washington Correspondent Arthur Krock, to Gulick on July 21, 1937 (a day before the court bill was ignominiously sent packing, back to committee and oblivion). 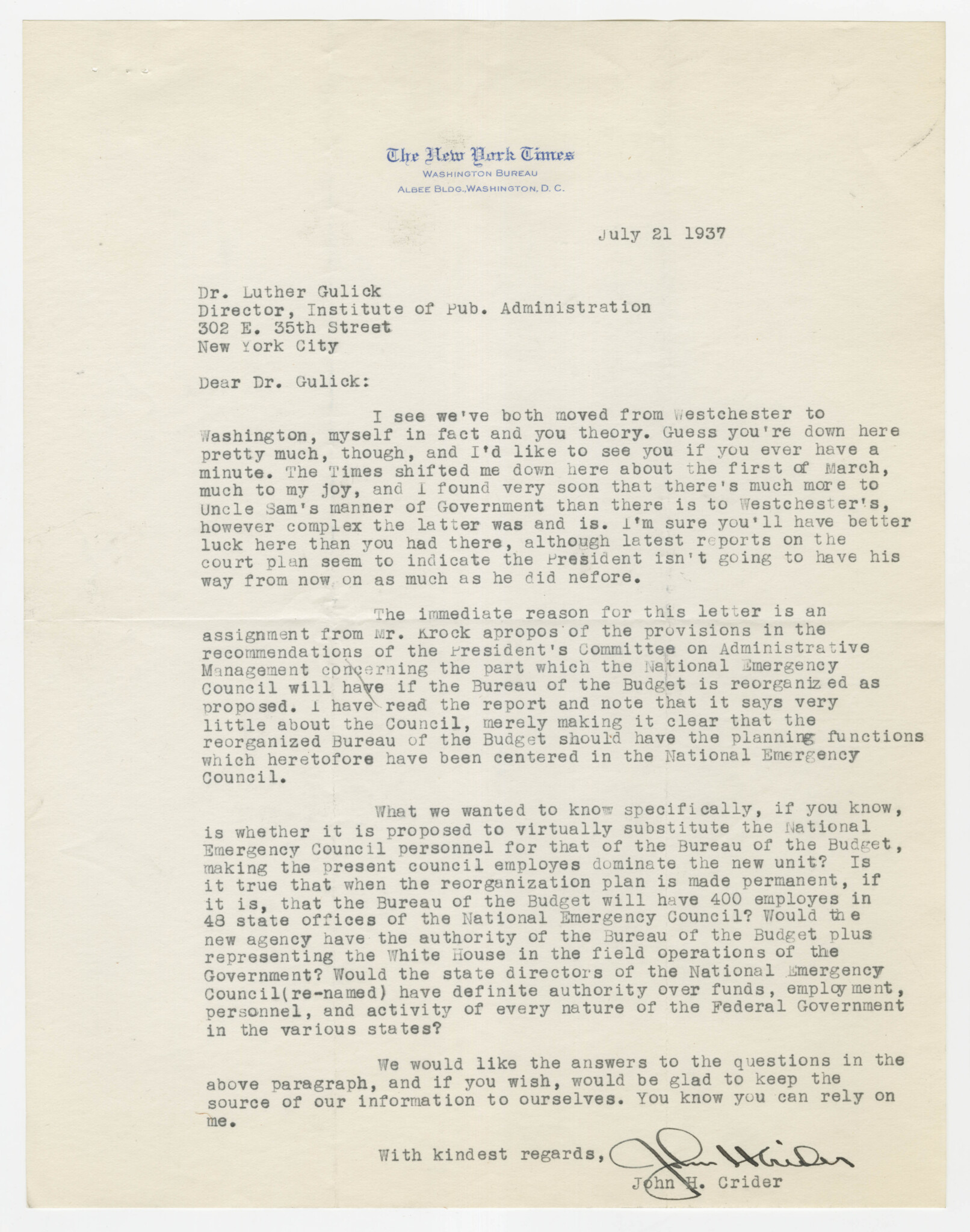 In his “strictly personal and confidential” reply to Crider a week later, Gulick confessed to some pessimism over the reorganization effort, in part because of the court fight. 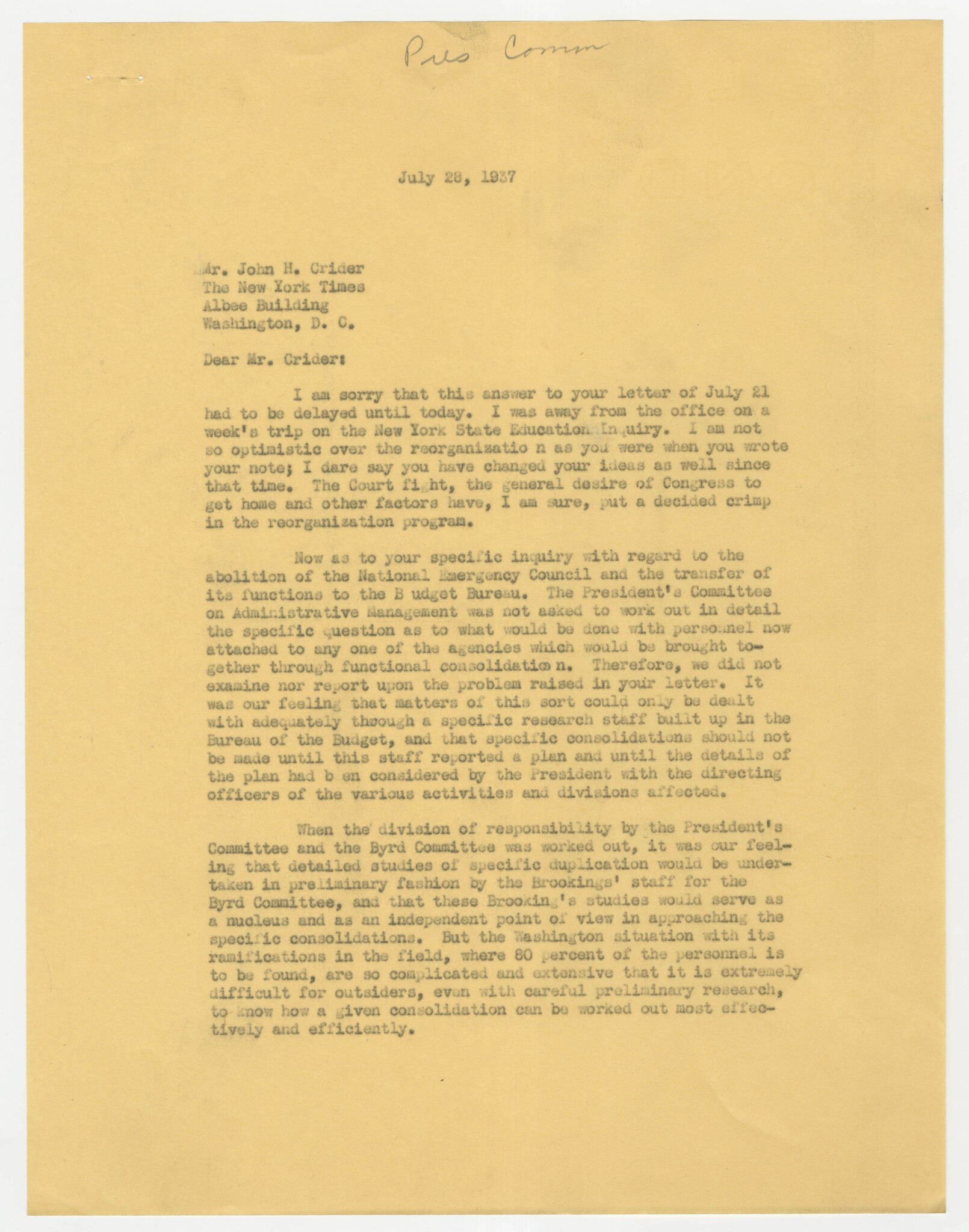 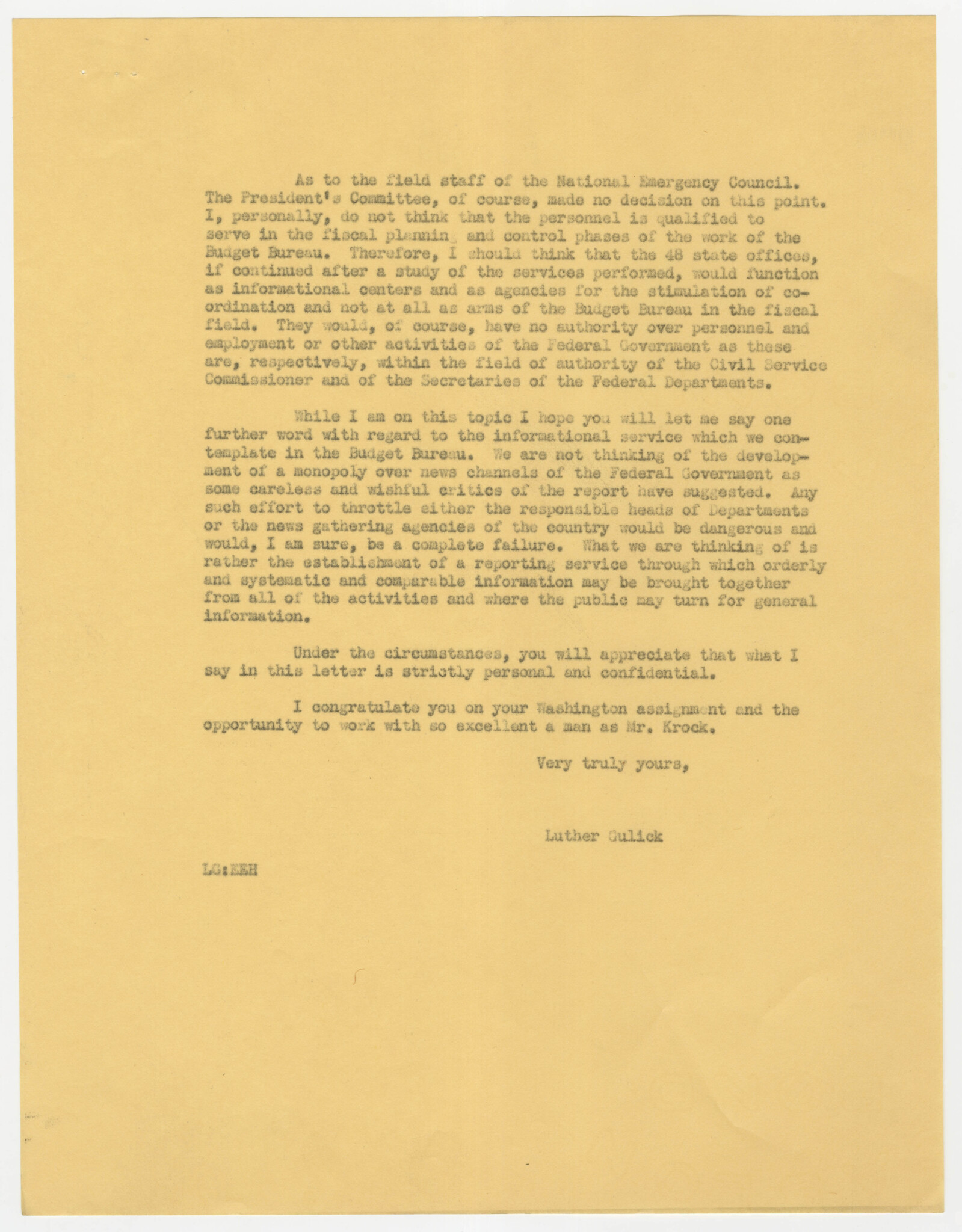 Crider (who went on to a distinguished career at The Boston Herald where he won a 1949 Pulitzer Prize for editorials on international economics) agreed with Gulick that Congress was so shell-shocked by the court fight that there was little hope of advancing the executive reorganization. 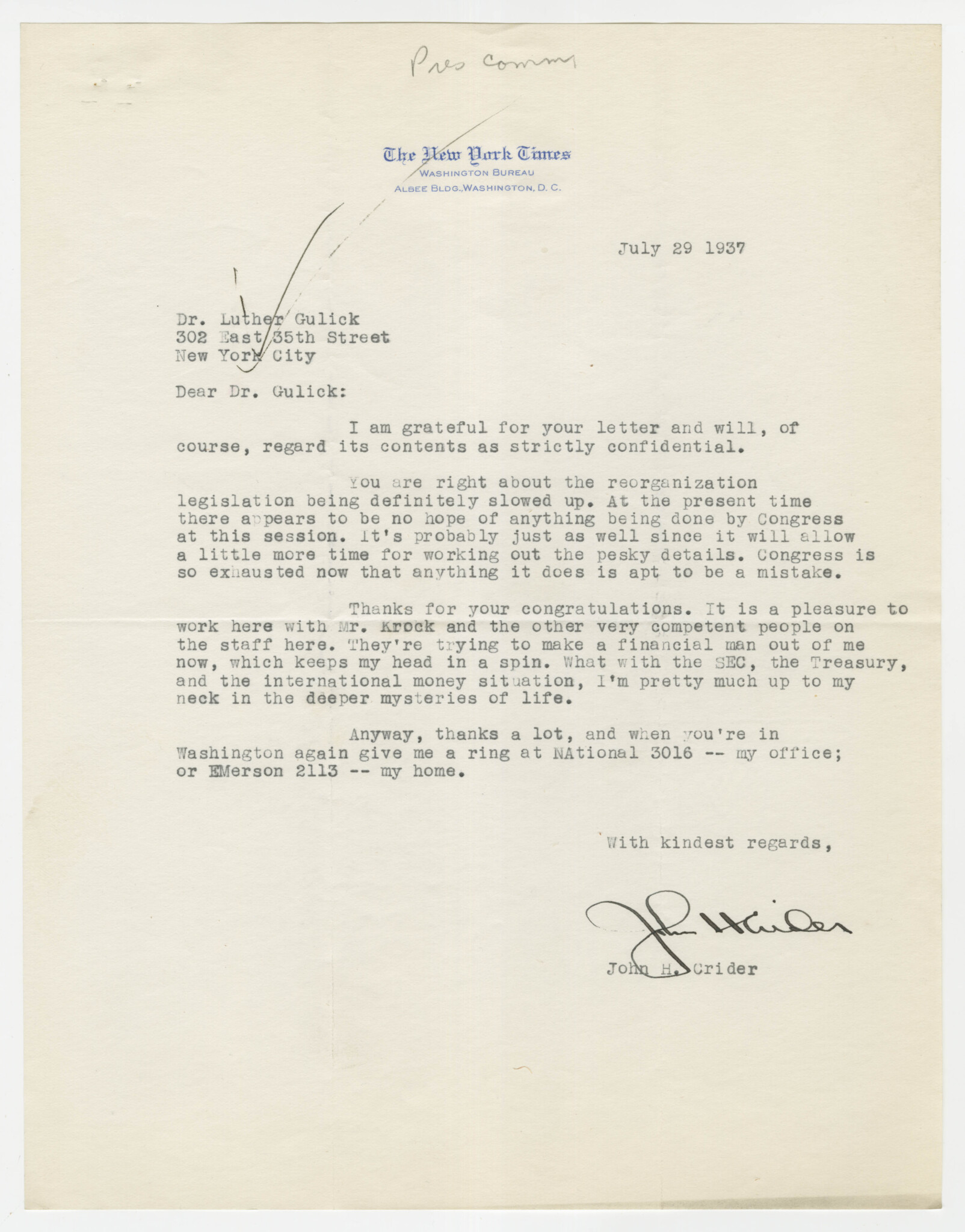 What do we draw from this foray into history?

President Biden, lacking FDR’s 1936 landslide victory and more cautious by nature, may also feel thwarted by the Supreme Court’s conservative majority, but he is not about to repeat his predecessor’s doomed crusade.