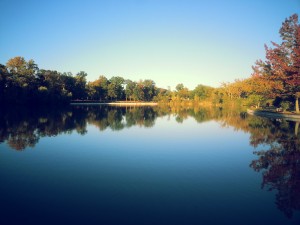 Flushing Meadows-Corona Park may be New York City’s second largest park but the lesser-known Kissena Park  (164th St & Oak Ave Flushing, NY 11358) boasts breathtaking foliage, a lake perfect for fishing, playgrounds, and plenty of fitness facilities. Tucked away in Auburndale, Kissena Park is just a short Q34 bus ride away from Main Street. But once you step onto the tranquil, open grounds, it’s hard to believe that you’re even remotely close to the chaos and sensory overload of Downtown Flushing.

“The bulk of Kissena Park was bought by New York City in pieces from 1907 to 1947,” said Beverly McDermott, 71. She is the plucky president of the Kissena Park Civic Association who fiercely guards the grounds with her trusty golden retriever, Jasper. According to McDermott, Kissena lake was purchased from William T. Janes whose father-in-law ran an ice cutting and manufacturing company on the lake. Samuel Bowne Parsons, a horticulturist and amateur Indian expert, named the lake after the Chippewa word kissina meaning “it is cold.” Over the years it has undergone many renovations and today it’s home to a wide variety of plant and animal life, including snapping turtles, ducks, herons, and egrets. 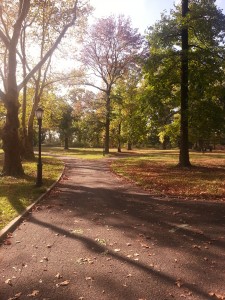 Much of the park’s tree groves and 65 acres of its land was acquired by the City from Parsons’s personal nursery after his death. “Many of Parson’s trees were used for the construction of Central Park and Brooklyn’s Prospect Park,” said McDermott. In addition to breathtaking tree-lined paths, Kissena is home to New York City’s only public bike track and also features tennis and handball courts and a golf course.

“Kissena Park is like a little slice of nature that I think the people who live here really need — there is something for everybody,” said Sam Kim, 43. He’s lived in Queens for over 20 years but only began frequenting the park after getting a dog about seven years ago. “I started coming just to give Andy a quick walk and after a while, you see some regulars and there’s this sense of camaraderie,” he said. “The space motivates you to exercise and take a breather from work.” 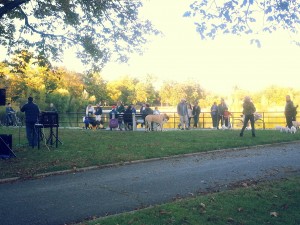 You also never quite know what you’ll find at the park on any given day. A free tai-chi class, a bridal party or quinceañera photo shoot, and even an impromptu karaoke session are just some of the surprises that await. Weather permitting, Kissena Park is heaven for dog lovers. On this particular Sunday, breeds from the tiniest chihuahuas to the cuddliest St. Bernards were ripe for the petting.

“Central Park is always going to be the superstar but Kissena definitely holds its own,” said Akaash Patel, 30. He lives in Manhattan but his parents live in Flushing so he visits as often as he can. “Main Street is overwhelming and I think that Kissena is a side of Flushing that people don’t expect,” he said. After you’ve stuffed yourself silly with pho, dim sum, and Korean barbecue, walk it off and wind down at Kissena Park — Flushing’s best kept secret.