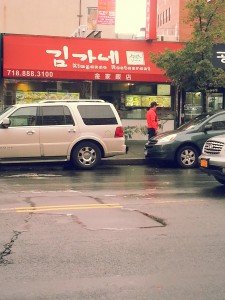 You’ve stepped off the last stop on the 7 line and somehow survived the crush of people. Somewhere amid the incomprehensible signage, blaring car horns, and businesses stacked four high, you need to find a place to get away from the rain and satisfy your hunger. Chances are anybody you ask will be able to direct you to the massive Flushing municipal parking lot and just across the street from it is Kimgane Restaurant (3912 Union St, Flushing, NY 11354).

Pronounced Geem-ga-neh, the name roughly translates to Kim’s Place. Kimgane might be a taste of home for many Koreans, but the staff happily cater to their diverse clientele. The menus are written in both Korean and English and the walls are splashed with images of the different dishes along with their names. Often people forgo the menu and simply point at whichever plate looks most appetizing. 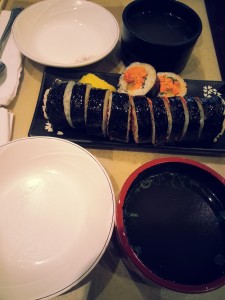 Gimbap is standard fare at a boonshikjip.

Once you arrive, you’re seated practically on top of the table next to you and the atmosphere is a curious mix of the standard Flushing level chaos coupled with the coziness of grandma’s kitchen. Kimganae is considered a boon-shik-jip, or snack house characterized by low prices (nothing is over $10) and generous portions. To many foreigners, boon-shik meals are the gateway drug into Korean cuisine. Some popular Kimganae dishes are marinated beef, pork, or chicken served alongside rice, gimbap (think of it as sushi’s distant cousin), and ramyeon (Korean-style instant noodles beefed up with extra toppings).

Jessica Balkissoon, 22, lives in Forest Hills and occasionally comes to Flushing with friends when she’s craving Korean. As she expertly grabbed a small square of pickled radish kimchi, she fondly recalled her first time at Kimganae’s. “I jumped right into the deep end by not getting what most people order here,” she said. “I wanted real street food so a friend suggested duk-bok-ki. The chewiness is surprising but once you get past that it’s delicious.” 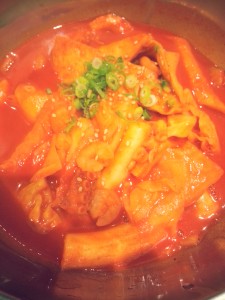 Duk-bok-ki may not be the deep end for a country known for eating live baby octopi, but itis one of the most popular Korean street foods and at its most basic consists of soft glutinous rice cakes and fish cakes that are all simmered together in a thick spicy sauce made from Korean red pepper paste. Other versions may come with a hardboiled egg, vegetables, or noodles. Back in the motherland, carts manned by middle-aged women are usually set up near schools or busy streets. Ladles full of duk-bok-ki are served in paper cups and are eaten with toothpicks. This dish is so loved that there’s even a town devoted to it.

Kimganae also serves several varieties of duk-bok-ki and Balkissoon’s favorite comes with baby shrimp and octopus. Andrew Hyun, a waiter at Kimganae, can vouch for duk-bok-ki’s popularity. “People seem a little scared of it at first because it’s so red and steaming but once they have a taste, they love it; they suffer through the pain,” he said. (This intimidation may also come from Andrew’s tendency to give first timers an are-you-sure-about-this look when they order the dish.)

When there’s nothing but umbrella to umbrella pedestrian traffic on the sidewalks of Downtown Flushing, nothing soothes the soul quite like the prospect of cheap, quick comfort food. Kimgane Korean Restaurant is a glimmer of hope on an otherwise dreary, rainy Saturday afternoon. It’s just the tip of a delicious iceberg but for now grab a seat and have some duk-bok-ki… if you dare.