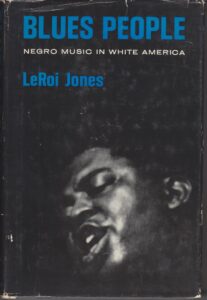 Blues is the title of this exhibition, but it also shares a name with the forthcoming album by Lamin Fofana. And All the Birds Sing Bass, 2020 (15’35 mins), a track from that album, plays continuously throughout the center gallery off two, large standing speakers. This forthcoming album is inspired by Amiri Baraka’s ground-breaking Blues People: Negro Music in White America (1963), published under Baraka’s former name LeRoi Jones in the midst of the civil rights movement. Baraka’s book is an influential meditation on blues music and its creators. It was his philosophical and personal response to outline the economic and political history of developments in African American music, as well as the erasure of its inventiveness. In his introduction to the book, Baraka describes his endeavor as:

“The path the slave took to ‘citizenship’ is what I want to look at. And I make my analogy through the slave citizen’s music — through the music that is most closely associated with him: blues and a later, but parallel development, jazz… [If] the Negro represents, or is symbolic of, something in and about the nature of American culture, this certainly should be revealed by his characteristic music.“[1]

As a collection of voices of musicians shaped by the experiences of slavery, racism and poverty, Blues People takes a physical form in Fofana’s multi-sensory space through an atmosphere of sound, light and incense. Affectively, this prompts the listener to encounter and confront Baraka’s insistence on tracing back the genre, blues, to historicize black musical forms and aesthetics. Fofana designated this part of the exhibition to Baraka’s Blues People as a “calm reflection” on cultural production in an alien world of appropriated symbols. This part of the exhibition was designed as an open space that grounds the sound and light spilling from the two other rooms where Nicolas Premier’s videos are projected. This is not a transitional space connecting the other rooms in the gallery. It does not dictate where the exhibition or viewers should continue, but is rather a meeting point with a table of referential books and plants, inviting guests to linger and listen intently.

To learn more about one of the prominent referential materials for the exhibition and Baraka’s other written work, please visit: poetryfoundation.org