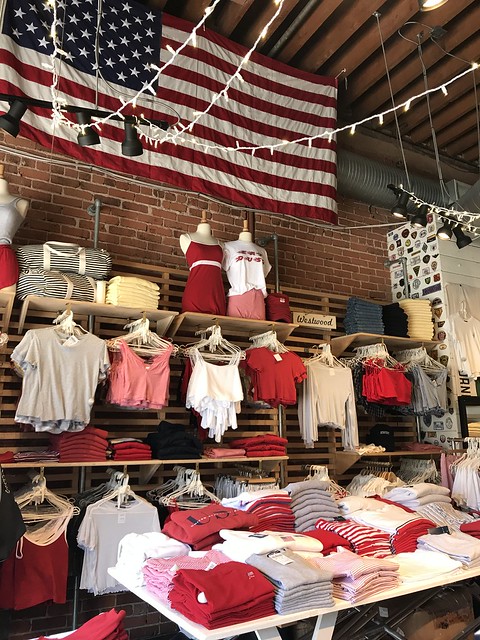 Throughout the city, businesses from ice cream shops to clothing stores delve into hundreds of job applications filled with resumes and references from teenagers hoping to bring in some money for the summer. At Brandy Melville, they ask for your Instagram.

Clothing store Brandy Melville launched stores in the US in 2009 and quickly became a teen hotspot. They have four locations in New York City filled with teenage girls looking for new clothes and others working at the cash register. The brand continues to gain popularity having an annual profit growth between 20-25%, according to digital marketing expert Jeff Bulla. As loved as the Italian clothing brand is, they have been criticized for scouting primarily young white employees.

Girls often get hired by being asked in the store if they are interested in working at Brandy Melville. If they say yes, the employee proceeds to ask for their name, availability and Instagram handle.

“I was hired because they asked me in the store but I’ve noticed that they rarely ask girls of color to work when they’re in the store,” said one employee. To her knowledge, all of her colleagues were asked to work at Brandy Melville. “Applying has a much lower rate of success,” said the 16-year-old.

Many shoppers experience seeing a flock of young, thin, white girls working at Brandy Melville. Their body types are a result of Brandy’s one size fits all clothes. This is an aspect of the store that faces criticism but ultimately, works in their favor. Justina Sharp, a 17-year-old fashion blogger described it to the Huffington Post as an exclusivity thing. Knowing that not everyone can wear the clothes makes more girls inclined to wear them.

The company defended this choice saying there is something for everyone because they offer stretchy and loose items. In regards to the lack of racial diversity in their models and staff, the brand has not released a statement.

15-year-old Isabel Greider talked about her sister’s experience working at Brandy Melville, saying, “Girls would get paid different wages (which my sister said was often racist).”

Although there has yet to be other reports of racial bias in wages, the lack of diversity does not go unnoticed by shoppers, especially non-white ones.

“The employees are kind of rude…..I don’t see any black workers. I want to shop at a store where it’s diverse,” said one Google review.

Greider elaborated on her sisters experience working at Brandy, “They took pictures of all the workers every day.” They were never told why. 16-year-old Gracie Paulson goes through a similar thing while shopping at Brandy Melville. Employees often ask to take a picture of her when she is wearing a vintage t-shirt. She believes it is to ‘steal’ the design.

The brand had multiple lawsuits involving them stealing clothing designs-including one with Forever 21. The sales associates are also part of the brainstorming team and most likely photograph shoppers clothes for inspiration.

In Brandy Melville’s New York City locations, the Google reviews are filled with comments complaining about the staff. “I’m so disappointed to give Brandy a 3-star rating (as I love their clothes), but I can’t lie. The staff there aren’t the sharpest tools in the shed and are extremely rude,” said Marie Khoury about the Soho location on Broadway.

Despite review upon review of customers having trouble with staff, Brandy Melville has made no change in the way they pick their employees. Why?

Lawyer and founder of The Fashion Law, an independent source of objective fashion law and business analysis, Julie Zerbo dissected the method to Brandy Melville’s madness.

The employees play a multipurpose role by not only looking the part but also acting as ambassadors, explained Zerbo. It is not uncommon for brands to use their employees to get input on what clothes they should make.

It is more cost-effective to hire teen girls than to hire consultants; teenagers are content with minimum wage. Most importantly, the employees succeed in suggesting clothing designs that please the consumers.

In regards to asking for employees Instagrams, the power of social media continues to grow. Brandy Melville wants girls with a strong following and an Instagram that reflects their brand.

“It’s hard to say that it’s not kind of brilliant business,” said Zerbo.