S 16 – LUNA NERA is a live installation created by Pioneers Go East Collective that integrates music, art, video and performance in an ensemble based process.

Inspired by and loosely based on Luigi Pirandello’s poetic short story “Ciaula scopre la luna” (“Crow Discovers the Moon), the production centers on Ciaula, a young Sicilian miner whose entire youth has been spent underground in the sulfur mines until one night when he discovers the regal presence of the moon shining in full splendor in the sky. Prior to that moment, Ciaula’s life had been so regulated by the darkness of the mines and the cruelty of his employers that he preferred the dark and dampness of the mines to the open air of the night above ground.  Ciaula’s sudden awareness of the moon’s luminous beauty elicits a transformative, magical moment for the young man, one in which his heart swells with new hope.

The action takes place in a sculpted set comprised of two darkened chambers that suggest the isolation and claustrophobic life experienced by Ciaula and his fellow miners. The performance inside one—a tunnel—is projected onto screens, while the performance in the other chamber unfolds behind a scrim.

The production’s four actors perform in silence, while the live vocalists, one who represents the moon and sings traditional Sicilian folk songs, and the other, who sings in English, narrate Ciaula’s journey from darkness to light. An electronic score is used to mirror and amplify the harsh environment of the mines, while the sweet beauty of the Sicilian singer’s acoustic guitar suggests the human and communal spirit that exists among the miners. 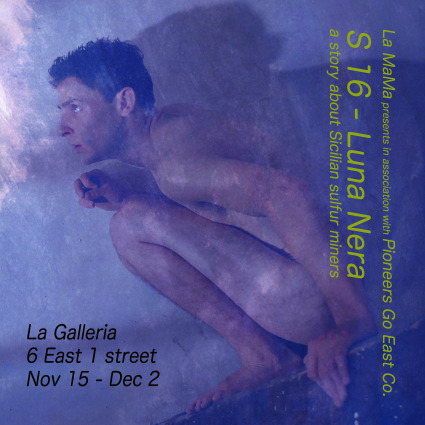 Pioneers Go East Collective – P.G.E.C. is dedicated to bringing together international theatre and visual artists to create works that use an ensemble-based process and incorporate poetry, music, design and live video to evolve a universal language of performance and visual installation that pushes the boundaries of theatre. P.G.E.C. develops projects that focus on experimentation in form and content and technology to attract and energize a new audience