In the PSA journal’s 31st edition, which is currently at the presses, editors Lisa Sarti and Michael Subialki talk to a group of Pirandello’s translators in “Pirandello and Translation: A conversation across the Field.” We’ve excerpted a piece of it for you here, in which the editors put a couple of questions to translators Jacob Blakesley, Jane House, Mary Anne Frese Witt, Michael Rössner and Martha Witt. 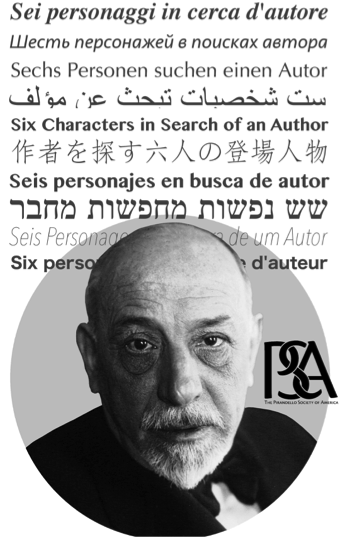 PSA: Our discussion up to this point, specifically regarding the language barrier and handling of idioms, makes us think of the oft-debated dilemma of literal vs. free translation, which seems always to be a somewhat controversial issue. Which method did you opt for when you translated Pirandello? Why?

Jane House: I suppose I’m halfway in between. Being too literal one becomes bland and sometimes nonsensical. Going too far in being “free,” one verges on adaptation. Creating a literal translation at the start will help make sense of the original and the translator’s first duty is to make sense; one must often wrestle with the original; thinking that the author made an error shows arrogance and laziness. Beyond making sense, I try to retain the poetry of a sentence or phrase; to be sensitive to the sounds of the original, the relationship of the phrase to other phrases; to this end, I will often count the number of syllables in the word, or in the sentence, and then endeavor to make my English of equal length. This is especially important in theatre where the rhythm of a line or an exchange of lines can so often evoke laughter or tears in the audience. I may read the original aloud, to hear the sounds and intonations. I grew up on British poets, especially Shakespeare, and discovered the iambic pentameter and learned how changing the meter can add drama to a text. Pirandello was a poet. His prose can include passages that are overwhelmingly lyrical; he was able to paint touching images with few words, because he was sensitive to sound, rhythm, alliteration, inflection and other elements that poetry comprises. He will use alternate words or expressions for the same action: crying, weeping, sobbing, shedding tears, wailing, howling. It can help the translator to be aware of these changes in the original; they can be inspirational guideposts.

Michael Rössner: Similar strategic decisions had to be made for the translation of Pirandello’s works into German. The project was started by my friend Johannes Thomas in 1982. What we found was a puzzle: Pirandello’s novels and short stories had been translated in some cases in a very strange way—leaving out the “philosophical” parts and adapting his work to the present context. In the 1920s this entailed a kind of post-Nietzschean neo-baroque style where, for example in Six Characters, the “Author” became the “Creator” and the characters became “creatures” in order to interpret the play as a quest for God in a world where God was dead. In the 1950s it took the form of an expressionist literature avant la lettre. So, we tried to return to Pirandello himself, to reconstitute his ideas. When the first project ended because of financial problems, I took over. We were able to find an editor for the whole edition between 1997 and 2001, and in that edition I have tried to realize the kind of “experiencing” instead of “rational judging” that Pirandello himself recommends in his essay [On Humor]. If you are really “inside” his work, you may experience what he describes as his way of composing: you hear the voice of the figures, you hear the voice of Pirandello himself in your language, and this helps you to make decisions.

Jacob Blakesley: I would say, first of all, that I think the concepts ‘literal’ and ‘free’ in the context of translation theory are not useful terms, since they are too ambiguous. An interlinear translation, a gloss translation, a word-for-word ungrammatical approach, a grammatically correct non-literary translation, a grammatically correct literary translation can all be described, in various degrees, as ‘literal’. The main problem is that the notion of ‘meaning’ in literary studies—and all the more so in translation studies—is polysemous and multi-layered, including both the signifier and the signified. And so I think that the concepts of ‘literal’ and ‘free’ should be discarded in favour of looking at how the translations fit into the target literary system.

In my translation of Pirandello, I had to try to stick as close to a word-for-word translation as possible, because the aim of my translation was to provide a facing-page translation to the Italian text. I would have preferred, in fact, to have translated another way, but I was both conscious of the linguistic aid that my version was supposed to offer (having been a student once myself) and I was directed by Dover to be very adherent to the source text’s semantic meaning. Dover’s copyeditors also objected on several occasions to places where they thought I had not been close enough to the text.

Mary Ann Frese Witt & Martha Witt: We view most translation work, to some degree, as a work of interpretation. Although we pay close attention to the original text, we also seek to make it relevant to the current readership, so on the spectrum between ‘literal’ and ‘free’ translation, we are somewhere in the middle in an effort to serve as handmaidens to the original while remaining mindful of today’s audience.

PSA: Well, this resonates perfectly with what renowned Italian essayist Cesare Garboli used to say about the translator’s task: he loved to compare it with that of a performer, as both must have the ability to “interpret” the text. Garboli looked at the narrative work as a piece of music, in other words. Do you agree with Garboli? And was this your approach when you developed your own voice for translating Pirandello?

Jacob Blakesley: I definitely agree with Garboli that a translator necessarily interprets the text s/he translates—in this sense, as others have stated, translation can be the utmost act of reading. We must remember that there is a linguistic abyss between an original text and the translation: the words we read in translation are those of the translator. In this sense, there is definitely co-authorship. We don’t read the words of Homer in English; we read the words of Robert Fagles or Emily Wilson. A translation is always the product of a meeting of poetics, as Franco Buffoni, the Italian poet and translation theorist says. In that sense, the voice of the author and the voice of the translator come together. Because of the constraints mentioned above, I don’t really feel like there was a harmonious meeting of poetics, since my style was limited by the facing-page Italian text and the need to be as close to the original semantic meaning and syntax as possible.

Jane House: Cesare Garboli is certainly on the right track with this analogy. Performers must be sensitive to the author’s intentions, to text and subtext and their character’s underlying emotions; to relationships with others; they must have knowledge of the historical period and social customs, and so on. I have spent much of my life, especially as a young professional actress, on stage performing in classical plays by such masters as Aeschylus, Alfred de Musset, Franz Wedekind, Anton Chekhov, and Tennessee Williams as well contemporary plays such as Lenny by Julian Barry on Broadway and, on national tours, Bedroom Farce by Alan Ayckbourn and An Inspector Calls by J. B. Priestley. Each of these works demand that the performer delve into the life of the play as depicted by the playwright. Performing in the chorus in Aeschylus’ Prometheus Bound remains an indelible experience as we trained for six weeks in movement and vocal expression.

However, translation demands that one “perform” in one’s imagination while wrestling with the language at home alone. Acting demands a presentation before an audience using one’s entire physical, emotional, intellectual, and spiritual equipment; you yourself are the instrument you need to play. In either case, background study and the imagination are of primary importance in interpreting texts.