In the Pirandello Society of America’s recent edition of the PSA journal, Jana O’Keefe Bazzoni talks to Jennifer Jewell and Patrick Mulryan about their recent collaboration on Raison d’être: An Evening with Pirandello. Jewell (actor and producer) and Mulryan (director and adaptor) tell PSA‘s O’Keefe Bazzoni about their experimental approach to Pirandello, as their 2018 theatre piece featured new translations and a collage of three plays: Six Characters in Search of an Author, Chee-Chee and The Man with a Flower in his Mouth.

Below is John L. DiGaetani’s review of the performance. You can find the entire conversation with Jewell and Mulryan, as well as this and other reviews in the 2019 PSA journal!

Pirandello in New York: “Raison d’être: An Evening of Pirandello”

“Raison d’être: An Evening of Pirandello” sounded suspiciously like a mish-mash to me when I read about the production, but when I saw the performance I was very pleased. The author of the adaptation, Patrick Mulryan, followed Six Characters in Search of an Author as a main text but used two other Pirandello plays to populate the stage with characters. Chee-Chee introduced the play and The Man with the Flower in his Mouth appeared toward the end. This all sounds very weird, but the combination made for a lively evening of Pirandellian theater. After all, Max Reinhardt’s production of the play in Berlin in the ’20s had already altered the play with the addition of details from other Pirandellian plays. The characters originally featuring in Six Characters are not the liveliest, and adding other elements can increase the effectiveness of the play. Pirandello himself was even willing to approve such adaptations.

Mulryan’s adaptation succeeded in keeping the audience interested in what was occurring onstage, despite a minimalist production and uneven acting.  The lighting was evocative and the stage was large—in the basement of a church in an off-Broadway location, in a theater called Theatre 71 at Blessed Sacrament. Though Pirandello was not known for being a good Catholic, Pirandellian theater happened here all the same.

In directing the play, Mulryan kept the action moving and the audience engaged.  Among the actors impersonating the six Characters, Nora Armani was especially moving as the Mother. Even though she had few lines, she was able to keep the audience interested in her and her suffering. The actor playing the Son, David Klein, was especially effective at dramatizing the cynical reserve of this character, while David Linden’s Father maintained a reserved innocence and kept defending it, despite the facts before him. Lucie Allouche’s Step-Daughter brought a convincing mania to her unhappy character. Toward the end, Melissa Eddy Quilty’s Madame Pace generated a comic, absurdist tragedy that altered the situation. Jennifer Jewell became especially moving as the Man with the Flower, bringing a clown-like comedy to his desperate monologue.

Overall, the performance succeeded in generating the comic absurdity so characteristic of Pirandellian tragedy. One hopes that this company will pursue and stage other examples in the history of Italian theater, as well. Venice in the 18th century remains a particularly fertile ground for Italian theater, with its two great Carlos: the realistic Carlo Goldoni and the surreal Carlo Gozzi, who had such a great effect on l9th and 20th century Italian and German opera—including on Pirandello himself. 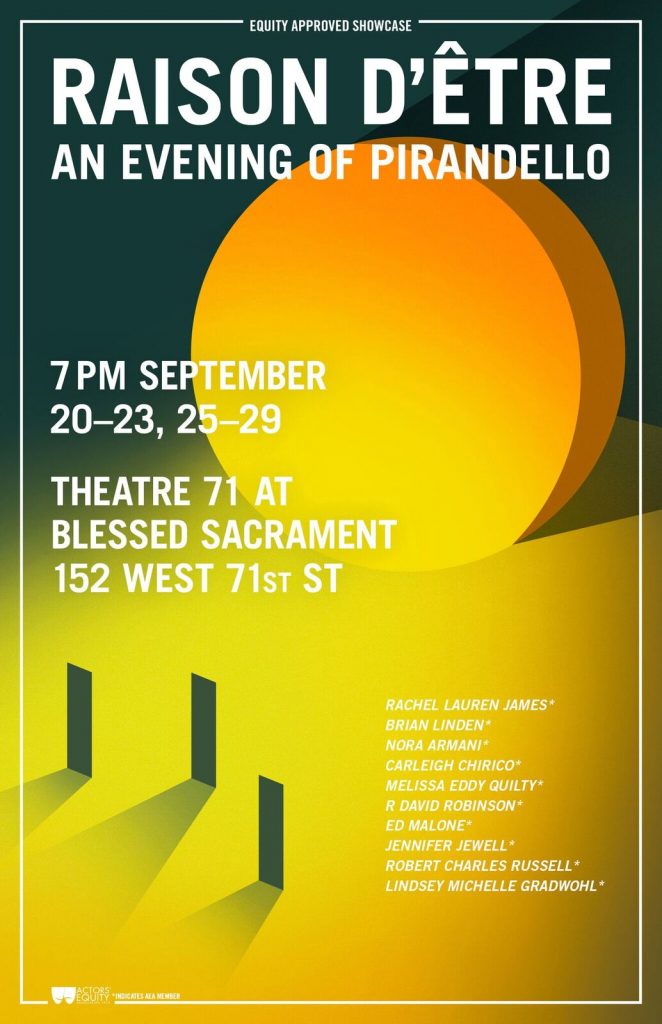 The Pirandello Society session at the MLA convention is scheduled for

For the full conference program, see this link.

Laura A. Lucci: Pirandellian Uncertainty: The Theatre as Laboratory

In quantum mechanics, the uncertainty principle suggests a limit to the precision with which complementary variables can be measured.  For example, in observing a particle’s position and velocity, the measurement of one variable becomes less exact as the other becomes better defined.  A similar problem exists in Pirandello’s drama, as his characters negotiate the divide between self-understanding and socially constructed identities.  Figures like Signora Ponza or Henry IV, with their indeterminate and occasionally volatile identities, dominate Pirandellian narratives, highlighting the complex question of who a person is, what they can be, and how circumstances influence their understanding of themselves and others.  Even Pirandello’s defining aesthetic, l’umorismo, resists simplicity, at once denoting a temporal extension from laughter to sympathy as well as the moment of intersection between these two emotional states.

Pirandello’s dramatic output not only tests the limits of theatrical convention and practice, but offers an inquiry into the nature of identity, social structures, and human interaction.  In short, the locus of Pirandello’s theatre was not simply the nature of representation, but an investigation into the limits and possibilities of that representation.  Using the theatre as a kind of laboratory, Pirandello scrutinizes the human condition within the confines of theatrical practice and space, mitigating the distance between dramatic representation and self-understanding.

This paper will examine what contemporary scientific inquiry and its aesthetic consequences (such as that of quantum theory) might bring to bear on understanding Pirandellian drama and the interrogations of identity and being contained therein.

Bio: Laura A. Lucci teaches dramatic history and literature at Queen’s University in Kingston, Ontario.  She received her PhD at the Centre for Drama, Theatre, and Performance Studies at the University of Toronto in April 2017.  Her doctoral thesis, Pirandello’s Dramaturgy of Time, examines three of Luigi Pirandello’s majors plays at their intersections with contemporary theories of time, temporality, and being.  She has been published in PSA: The Journal of the Pirandello Society of America, and has written for the web at the Thomas Fisher Rare Book Library and Nightswimming Theatre.  Her research interests include 20th-century Italian Theatre, Modernism, Italian Renaissance performance and spectacle, and the aesthetic consequences of science and philosophy. Her practical background is comprised largely of translation, dramaturgical support, and technical production. Laura is affiliated with The Pirandello Society of America, The Modern Language Association, and The Midwest Modern Language Association.

Alberica Bazzoni: The (Un)Masking of Patriarchal Power in Pirandello’s Plays

Pirandello’s literary and theatrical production engages extensively with the troubled relationship between the sexes, often proposing a rather conservative, when not plainly sexist, perspective on gender roles. Far more experimental on a theoretical than on a social level, Pirandello never directly questions the boundaries of patriarchy. However, the crisis of identity he represents is also the crisis of an ideal harmony within the traditional family, as well as the crisis of a stable, hegemonic masculinity. While some critics have seen in Pirandello’s works mainly or exclusively the reinforcement of patriarchal structures (Caesar 1990; 1992; Günsberg 1994), others have exalted the author’s representation of the female ‘other’ as the positive pole of his discourse on identity and knowledge (Martinelli 1992; Bini 1999). In between these opposite views, my contribution points out a tension between replication and contestation of the patriarchal script in Pirandello’s works. In fact, in a number of plays Pirandello unmasks gender roles as the product of patriarchal power, offering the spectacle of male characters who try to write, silence, control and objectify the female ones. The aspect of domination inherent in this process becomes apparent when female characters ‘talk back’, offering an alternative view to the self-righteous narratives of male characters, as in the case of the struggle between the Stepdaughter and the Father in Six Characters in Search of an Author, and when male versions are revealed as more or less culpable fantasies, such as in Ludovico Nota’s and Grotti’s accounts of Ersilia Drei’s motivations in Clothing the Naked. Furthermore, in later plays such as Lazarus and The Mountain Giants, Pirandello exposes masculine insecurities and strategies of domination by creating polyphonic scenes in which the female perspective emerges strongly. The result is a fractured, humoristic discourse, which reproduces patriarchal gender roles while at the same time casting a doubt on them – that they may well be a constrictive mask that men impose on women; and on themselves.

Bio: Alberica Bazzoni is British Academy Postdoctoral Fellow at the University of Warwick, working on a project on gender and the Italian Literary Canon. She completed her PhD at the University of Oxford, where she then taught Italian language and literature as Lector and Non-Stipendiary Lecturer. Her research interests include Modern Italian Literature, Literary Theory, Political Philosophy and Gender and Sexuality Studies, and she has published on Mark Turner, Adriana Cavarero, Goliarda Sapienza, Elsa Morante and Luigi Pirandello. Her PhD thesis, Writing for Freedom: Body, Identity and Power in Goliarda Sapienza’s Narrative, won the ‘2015 Peter Lang Young Scholars Competition in Women’s Studies’ and is forthcoming in 2018.

Lisa Sarti “Who Am I? Who Am I Not? – Agency and (Dis)identification in Luigi Pirandello’s The Notebooks of Serafino Gubbio, Cinematograph Operator”

The sixth of Luigi Pirandello’s seven novels, The Notebooks of Serafino Gubbio, Cinematograph Operator (1925) tells about the experience of Serafino Gubbio at Kosmograph, the film studio where he is employed as a camera operator, monotonously winding the film reel. Besides addressing the world of silent films, The Notebooks prefigures the modernist quest for a definition of art as a porous field in which divergent media intertwine with their own expressive languages, and theorizes the dehumanization of mechanization.

The Notebooks lingers over the contemporary fascination with the machine age and its hallmarks—speed, efficiency, progress, and modernity—in order to confront the disparity between reality and imagination. The result of that faith, Pirandello shows in the book, is a profound impact on the individual and his identity. Through the protagonist’s perspective, Pirandello voiced his own obsession with the increasing prominence of machinery in everyday life and its desensitizing consequences. Serafino’s attitude about his degrading task and his anxiety for the machine “swallowing” up his identity reveal Pirandello’s own skepticism about technological progress, particularly its tendency to cause self-estrangement. Bewildered by his own transformation, Serafino cries, “I ceased to be Gubbio and became a hand.”

This paper investigates the existential repercussions of the new medium in Serafino’s life, and, more importantly, the tensions and contradictions that inevitably complicate the search of his own identity and his attempts to dis-identify with the camera. If, on the one hand, Serafino laments the necessity of his absolute “impassivity” while filming and his being reduced to a mere “handle,” on the other he contradicts himself by proudly assessing his human agency in the filmic process, “one cannot find a machine that can regulate its movements according to the action that is going on in front of the camera.” Serafino conceitedly states his skillful turning of the handle, which is faster or slower according to the speed he deems appropriate to the scene he is shooting. Film technique is here not only functional to our understanding of the character’s psychology, but it also conveys Serafino’s eagerness to get involved with the action in front of the camera, despite his numerous claims to the contrary throughout the novel and his tendency to characterize his ‘self’ as an object. Serafino seeks control, but he also seeks to affirm his creativity and the superiority of human intervention over the machinery.

Film-theory and the new technological reality of the medium intertwine with Serafino’s feelings, ambitions, and multifaceted identity. Ultimately, these tensions emerge as an integral part of the narrative texture and one of the most disquieting traits of Modernity.

Bio: Lisa Sarti received her Ph. D. in Comparative Literature from The City University of New York. She is Assistant Professor of Italian at BMCC – The City University of New York in Manhattan. Her main field of research is fin-de-siècle visual culture, fiction, and the performing arts. She has published articles on Arrigo Boito, Melodrama, Annie Vivanti and the Female artists of the Cafè Chantant, American musical theater, and Pirandello’s storytelling and theatre, as well the cinematic adaptation of his short stories. She co-edited (with Michael Subialka) the volume Pirandello’s Visual Philosophy: Imagination and Thought Across Media (Fairleigh Dickinson UP, 2017) and she is currently working on a book on the aesthetics of spectatorship in Italy between 1820 and 1900.