The Pirandello Society of America presents its one-day conference

Celebrating the 150th anniversary of Luigi Pirandello’s birth, this one-day conference sponsored by the Pirandello Society of America seeks a broad spectrum of contributions that evaluate and illuminate Pirandello’s legacies on world theatre, literature, cinema, and other media over a period of more than a hundred years. We encourage contributions that are interdisciplinary and engage with a variety of theoretical models when looking at Pirandello’s work and its multifaceted resonance.

English is the official language of the Conference.

Attendance is free and open to the public.

The full program for the conference is available. Click here to read.

For further information about The Pirandello Society of America please visit our website at: http://pirandellosociety.org/ and Facebook page: https://www.facebook.com/pirandellosocietyofamerica/ 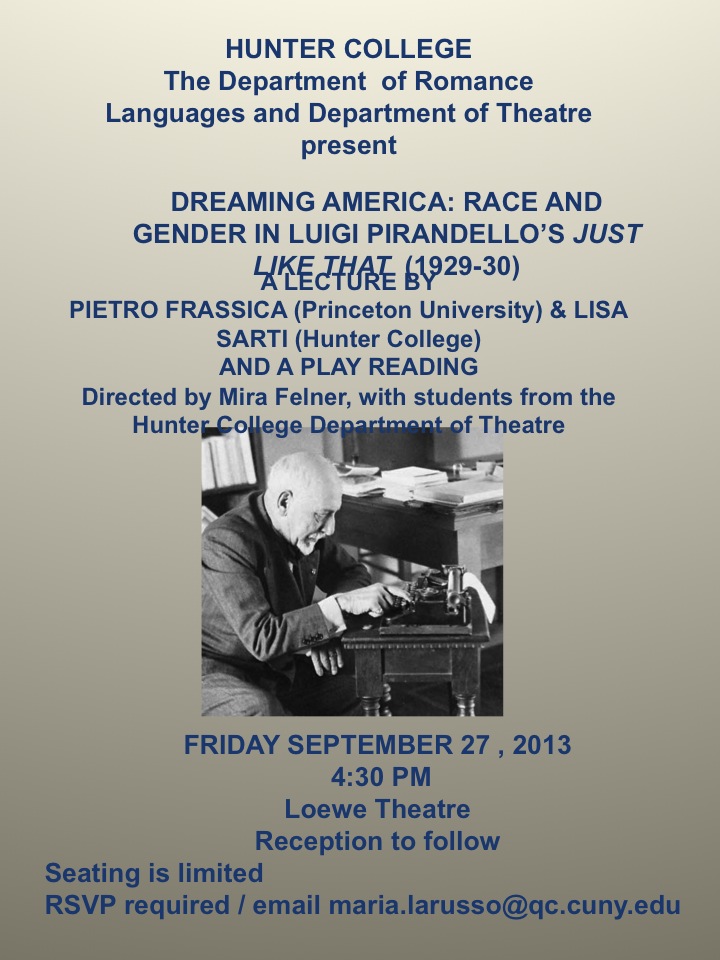 “Pirandello and the Philosophic Eye of Cinema”

Pirandello’s work had a lasting influence on cinema, testified not only by the vast number of adaptations of his work, but also, as several scholars have shown (e.g., G. P. Brunetta, M. Gieri), by his indirect influence on certain filmmakers. However, it is also known that his direct involvement with cinema is quite inconsistent and often marked by hesitation and the tendency to hand down the work of screenwriting to others. In order to understand Pirandello’s ambivalent relationship with cinema, one must look at his novel The Notebooks of Serafino Gubbio and his theoretical essays on cinema. Studies that have taken a closer look at Pirandello’s texts within their cultural context have pointed to the fact that behind his uneasiness towards cinema are more wide-reaching problems, such as his need to distance himself from the blind and destructive embracement of machines and mechanization that dominated the intellectual life of his time, and his need to express the aesthetic and ethic superiority of theatre over cinema (e.g. S. Costa; S. Michelini).  From the premise that much of the discourse about cinema contained in theThe Notebooks is actually extrinsic to the art of film per se, this paper examines Pirandello’s diverse and conflicting discourses to arrive at a description of his position between different media, and in particular towards cinema. The integration of Pirandello’s essays on film with a discussion of The Notebooks further clarifies the way in which Pirandello expresses his interest for and even his participation in the aesthetic and philosophic experience of filmmaking.

“George Fitzmaurice’s As You Desire Me (1932): Theatrical versus Cinematic Horizons of Expectations and the Case of Greta Garbo’s Elusive Identity”

The paper examines George Fitzmaurice’s 1932 filmic adaptation of the play As You Desire Me in light of Pirandello’s own view of the relationship between theatre and sound cinema (“Se il film parlante abolirà il teatro,” Corriere Della Sera, 16 June 1929). When Pirandello’s pièce crossed the ocean, it was readapted to meet the horizon of expectations of the American audience as well as the standards of the filmic cultural industry in Hollywood. Fitzmaurice’s picture emphasizes the more melodramatic aspects of the story: the decadent sensuality of the female protagonist, the Unknown Woman; the romantic love story; even the exoticism of certain situations. The greatest difference, however, concerns the ending: the film’s finale leaves little doubt as to the protagonist’s real identity—she is an impostor with whom the male character is now in love—while the play is much more ambiguous and offers no concluding resolution. In this way, the film seems to abolish the central theme of the play, that of the multiplication of identities, failing to raise the question of whether it is at all legitimate to speak about one’s identity (or identities) as a unified and coherent whole.

Yet, this key element, while absent from the plot, is still present in the paratext of the film as the choice of Greta Garbo in the role of the Unknown Woman reveals. In fact, the fate of Pirandello’s protagonist and that of the Swedish actress overlap. Garbo was a cinematic chameleon, her public identity was elusive; she remained a mystery for its critics and admirers. It is through Greta Garbo that the film is still able to address the fundamental issue of the plurality of identities—and of the ultimate lack thereof—that is at the core of Pirandello’s As You Desire Me.

Directed in 1930 by Gennaro Righelli, La canzone dell’amore was the first Italian sound-movie, bringing onto the screen a subject adapted from Pirandello’s 1905 short story, interestingly titled In Silenzio (pub. 1922). My paper explores the discrepancies between Pirandello’s original story and its cinematic rendition as a way to shed light on a time of crucial transition in Italy’s political and cultural life. On the one hand, Pirandello’s critical judgment of the filmic representation of his story resonates with his known positions on the epistemology of cinema as an art. On the other, by distancing himself from the altered meaning conveyed by the screenplay, Pirandello rejected the “normalization” of the most provocative instances that the short story presented and that the movie, instead, “silenced.”

While expressing his dissatisfaction in terms of the artist’s right to intellectual independence and transgression, Pirandello seemed unaware that the modifications he criticized were in the service of Fascist propaganda, which was increasingly interested in cinema as an essential medium for its message. From this perspective, the substitution of the morally daring figure of the single-father, the protagonist of Pirandello’s story, with the young woman that in the movie assumes the role of the ‘natural mother’ of future generations is emblematic of the ideal of moral regeneration on which Fascism founded both its oxymoronic form of “conservative revolution’ and its imperialist design.

My paper interrogates the phenomenon of literature on screen from both a literary and filmic perspective, focusing on the cinematic rendition of Pirandello’s short story Il viaggio. Following Dudley Andrew’s assessment that although adaptation cannot exist without its original source, it must be respected as an original creation, I analyze the multi-layered interaction of literary and cinematic texts. I examine Vittorio de Sica’s Il viaggio (Adriana Takes a Trip), 1972, in relation with the literary work he relies on, giving prominence to the different treatment of the theme of decadence, a subject that was very popular in fin-de-siècle European literature.

The filmic reading transforms the Pirandellian form of storytelling, which is turned into the director’s personal interpretation and laden with melodramatic clichés. Although Venice, decadent city par excellence, is the final destination of a long journey along the peninsula, besides serving as the backdrop of the protagonist’s death both in the narrative and the film, the urban space acquires a distinctive function in the two works. Whereas Pirandello uses Venice as the scenery for Adriana’s decision to kill herself, making the city the symbol of moral degeneracy and of the demise of Adriana’s former uncorrupted Sicilian life, De Sica overshadows the decay of traditional values. Adriana’s cinematic end is tinged with a Melodramatic nuance that transforms the narrative’s suicide into a highly emotional, albeit scarcely credible, heart attack striking Adriana in the happiest moment of her life. Furthermore, the languid melancholy of the score, wed to skillful camera movements, excessively highlights the fervor of the protagonists’ feelings. Thus, the film eclipses the traditional themes of decadence, such as exoticism and sexual anti-conformism, which are central to the development of the narrative plot.

at the MLA in Los Angeles

1. Crossing Genres in Word and Image: Grotesque Narratives in Pirandello and His Contemporaries.

“The Paradigms of Paradox and Sarcasm in the Pirandellian Grotesque”

“Four Authors in Search of a Character. C. K. Scott Moncrieff’s satire between Pirandello and Swift”

“Clothes (Don’t) Make the (Wo)Man: Costume as Mask and Identity in Enrico IV and Nostra Dea”

“Puppets and Marionettes on the Italian Screen: A Taxonomy of Genealogies”

Daniela Bini – U. of Texas, Austin