William Weaver’s compelling translation of One, No One, and One Hundred Thousand, was first published in 1990 and has since gone out of print, becoming increasingly difficult to find. But in October 2018, a new press based in California, Spurl Editions, re-issued Weaver’s translation, bringing the unforgettable voice and sometimes disturbing vision of Pirandello’s protagonist, Vitangelo Moscarda, back to English readers again.

In November of 2018, PSA’s Michael Subialka sat down with the editor of Spurl Editions, Eva Richter, to discuss the press’s recent publication of William Weaver’s translation. You can find the rest of this conversation in the PSA journal’s recently-published 31st edition. 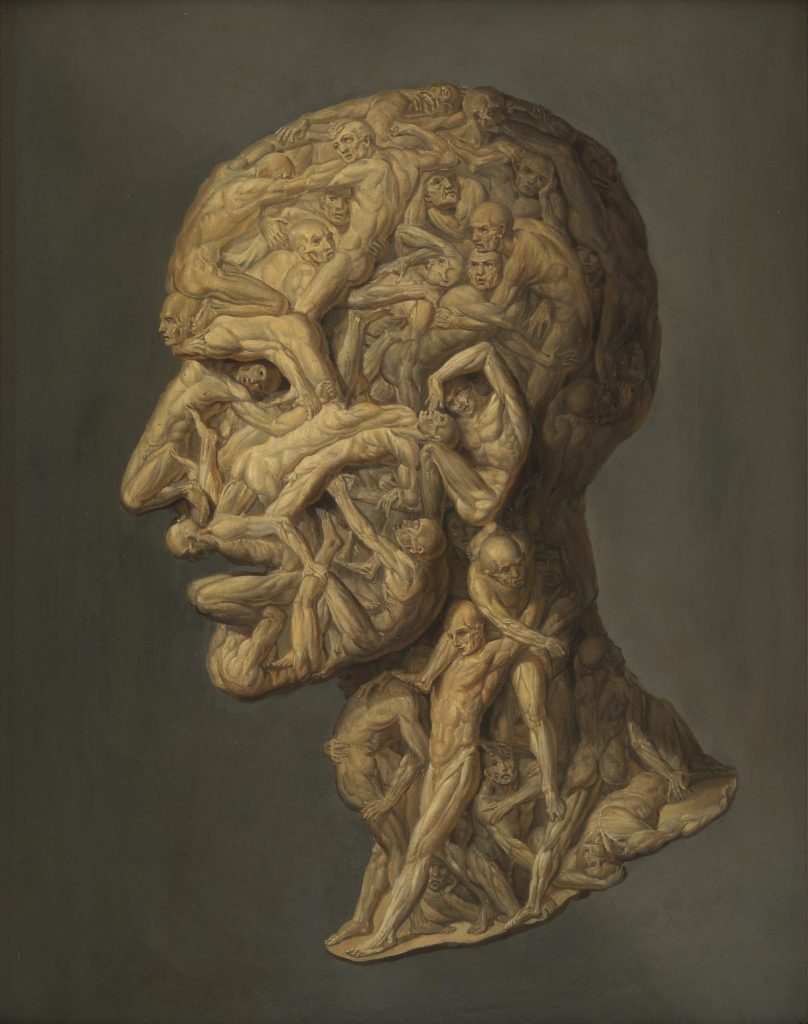 MS: We can’t help but point out the cover image you’ve chosen for the new edition, featuring Filippo Balbi’s painting “Testa anatomica.” Can you tell us more about what made you opt for this image?

ER: I came across this painting even before starting Spurl Editions. I thought it was beautiful, with the muted green-brown background accentuating the odd stretching men’s bodies that form the bodiless head. I thought it would make an eye-catching book cover; when I read Pirandello’s novel, it seemed to fit it perfectly. The multiple figures that make up the painted portrait call back to the novel’s theme that a person does not have one identity that is fixed in time, but rather multiple identities, based on who the person is with, where he is, how he perceives things around him, how he sees himself at that moment, and, further, the inevitable multiplicity of identities that any fictional character (such as Moscarda) takes on, based on who is reading the novel. The head itself, since it has no eyes or body, also seems somehow empty in the way that Moscarda ultimately seems to have emptied himself in the end.

MS: This connection between the image and Moscarda’s experience of multiplicity and self-dissolution seems compelling and speaks to a major theme across Pirandello’s works. In his famous essay from 1908, On Humor (L’umorismo), Pirandello argues that the self is indeed multiple and changing and that we need to be able to see ourselves from outside in order to jar ourselves out of our static self-conception toward a more vital one – much in the way that Moscarda’s journey of self-rediscovery begins with his estranged experience of seeing his own face. I think lots of us can probably relate to seeing ourselves in the mirror and feeling detached, or hearing someone else’s description of us and not recognizing ourselves. Do you think we’re meant to relate to this experience, or is Pirandello drawing something more like a limit case, something that we recognize but that also far exceeds our own, usual experiences?

ER: I agree that Pirandello is drawing something like a limit case, which is bound to exceed our own experiences. It is interesting to me that the narrative expressly acknowledges this—there are multiple instances where Moscarda remarks that although his thought processes may seem familiar to any reader, there is something essentially different about where Moscarda’s thoughts are taking him. Maybe, in this way, the reader is meant to become more alienated from him/herself through reading the novel. Those thoughts that the reader has, over many years, become accustomed to now seem strange, grotesque, and extreme, when viewed through the refracted lens of this narrative. The reader is forced to look at their own seemingly benign self-reflection as only the half-formed beginning of an idea that must lead to a total revolution of the self.

MS: This idea of a total revolution of the self speaks to what you mentioned before about Moscarda ending up “empty” by the end of the novel. Can you say more about that? Do you think that the ecstatic kind of immersion that he experiences with nature in the closing part of One, No One, and One Hundred Thousand should be taken seriously, or do you think he has lost his mind? And, in turn, do you think this novel is ultimately positive or negative or neither or both?

ER: I think that those ideas or interpretations exist in an interesting tension with one another. To me, the notion that Moscarda is “empty” by the end of the novel has to do with the narrative’s ultimate rejection of all those things that make a typical fictional character a “character.” Moscarda rejects language, discourse, and human relationships for the “wordless” sphere of nature. This may be a positive development, especially because he has gone past the more solipsistic thoughts that obsessed him in the beginning—but, of course, there is also something a little sickening in Moscarda’s withdrawal. And, because Moscarda’s withdrawal marks the end of the novel, it is like witnessing this character’s death.

MS: Maybe since we’re talking about the disappearance of the novel’s protagonist, now is a good time to change topic and ask a bit more about the specific translation and some of its nuts and bolts. For example, we noticed that you thank Bard College for its support of the publication. Could you say more about their involvement?

ER: William Weaver, who translated One, No One, and One Hundred Thousand, as well as other works by Pirandello, was a professor of literature at Bard College for many years. Bard College licensed the rights to publish his excellent translation to us.

MS: Weaver’s translations of Pirandello and other Italian authors are by now “classics,” and he played a huge role in helping to bring modern Italian literature to English-language audiences. Are there any aspects of his rendering of this novel that you particularly like or find compelling, or any things that you would have liked to see done differently?

ER: I think Mr. Weaver did a wonderful job with this translation, as well as with his translation of The Late Mattia Pascal. His use of modern, generally conversational vocabulary helps to imbue Moscarda with a personality that feels genuine; conversely, Mr. Weaver’s use of syntactically complex sentences and structures conveys that sense of an increasingly vertiginous philosophical analysis.

MS: Vertiginous is such a good way of describing the feeling of the novel’s conceptual development, and it reminds us of Pirandello’s earlier novel, The Late Mattia Pascal (Il fu Mattia Pascal, 1904), which Weaver also translated into English. That novel begins with a “philosophical” preface in which the narrator depicts the world spinning in the void of space, making its inhabitants lurch here and there, pointlessly, until they die. A somewhat bleak, existentialist kind of outlook. The Late Mattia Pascal is still in print, recently re-released in the New York Review Books series of Italian titles. But of course many of Pirandello’s works are no longer available – or were never available – in English. Honestly, we find it somewhat baffling that despite his international fame, his Nobel Prize, and everything else, Pirandello’s works have still not been completely translated into English. As someone in the business, we wonder if you have any thoughts about what kinds of obstacles might have held that process up. Is this a specifically “American” problem (there is, for example, a “complete works” translation in German, which was edited by the prolific Pirandello scholar Michael Rössner)?

ER: We find it baffling as well! Yet this seems to be a fairly widespread issue in American publishing. In other countries (such as Germany, France, etc.), you regularly see the complete translated works of an author published by the same publisher. I am not sure if there is something about the American market that discourages this kind of thing, if maybe American readers just want to read the “one classic,” instead of a writer’s full life’s work. Hopefully translators and publishers will continue to bring Luigi Pirandello’s works into English, so that we non-Italian readers can have access to the range of his fascinating work.