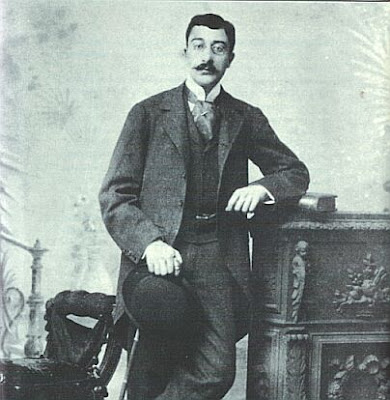 When the Christians brought him to be hanged,
the innocent boy of seventeen,
his mother, who there beside the scaffold
had dragged herself and lay beaten on the ground
beneath the midday sun, the savage sun,
now would moan, and howl like a wolf, a beast,
and then the martyr, overcome, would keen
“Seventeen years only you lived with me, my child.”
And when they took him up the scaffold’s steps
and passed the rope around him and strangled him,
the innocent boy, seventeen years old,
and piteously it hung inside the void,
with the spasms of black agony–
The youthful body, beautifully wrought–
His mother, martyr, wallowed on the ground
and now she keened no more about his years:
“Seventeen days only,” she keened,
“seventeen days only I had joy of you, my child.”


This poem was inspired by the Denshawiaffair, a 1906 clash between British military personnel and Egyptian locals. The Englishmen, traveling between Alexandria and Cairo, stopped in the village of Denshawi and shot some pigeons belonging to the villagers; after violence erupted, one of the Englishmen was hit in the head with a stone and later died, of sunstroke, after making his way back to the British camp.  The English responded by trying and hanging five of the villagers for murder, a punishment that Sir Reginal Storrs, an acquaintance of Cavafy’s, referred to in his 1945 memoirs, Orientations, as “excessive and medieval.” Cavafy, who was violently opposed to capital punishment (“whenever I have the opportunity I declare this,” he wrote in a note of October 1902), was similarly revolted, although of course his sympathy in this poem has an erotic component.

Notes and translation by Daniel Mendelsohn

Cavafy’s “27 June 1906, 2 P.M.” exposes the tangled history of rising nationalism which endangered the Greek diaspora communities around the Levant at the turn of the century. Over a hundred years later, the poem remains relevant to our political plights, exposing the realities behind the proliferation of human communities of immigrants, refugees, detainees (citizens and non-citizens) in Europe, Africa, the U.S., and beyond. The presence of such communities is met with suspicion because
their denizens personify a kind of dangerous insurgency that must be contained, or dealt with, before it begins to encroach upon the interests of the state and the citizens proper.”

“27 June 1906, 2 P.M.” begins with the public execution of the youngest of five Egyptian men by the British occupying forces at the village of Denshaw. Dated “January 1908,” the poem’s composition accords with an important, yet little known, event that is absent in Mendelsohn’s note: on 18 January 1908 a public outcry forced the British government to release the remaining Denshawai prisoners, a shocking acknowledgment of the grave injustice committed on 27 June 1906. Although this makes Cavafy neither an opponent of British Imperialism, nor an anti-colonial writer, it calls into question Mendelsohn’s reading of the poet’s “sympathy” as “erotic.” Cavafy was not, could scarcely have been, indifferent to the larger pattern and implications of the political events he describes. His depiction of capital punishment captures the historical moment the title bespeaks, yet it also transcends it, leaving us with a powerful mediation on time, trauma, and memory.

The assault that unfolds in lines 9-10 is not only an attack on justice and our humanity; it is a painful reminder of the necessary ills of colonialism, imperialism, and political gain. Carried out deftly and resolutely, it is experienced by the victim’s mother, a liminal figure—part martyr part beast—who vacillates between dread and resignation; refusal and revolt. “Seventeen years only you lived with me, my child,” she keens, as she drags herself “beside the scaffold,” moaning and howling like a beast. The dread of the impending loss (l. 9-10) is intensified by the precision and deftness of the execution, and is further magnified by the image of the body hanging lifeless inside the void. A reminder of the depravity of the crime and the fragility of life, the body is hangs “piteously” (l. 12) “with the spasms of black agony” (l. 13), an image both haunting and unforgiving.

Mendelsohn’s choice to translate “ελεεινά” as “piteously” takes away from Cavafy’s intended effect in the original composition. “Eλεεινά” is a word that combines debauchery with moral wretchedness—the kind that inspires revulsion and denotes wider impurity of action and intent. Describing the body as such violates its sanctity. And yet, this is precisely what has happened: not only has the young man become a sacrificial lamb, he has been executed in the most brutal, most savage way.

If the poem’s title anchors the crime to a specific moment in time, the passage of time within the poem (and in the final three lines, in particular) liberates it from the constraints of both time and history. The mother’s lament in the final three lines invites the reader to rethink the injustice committed and determine what’s worse: the memory of the trauma, or the clarity that comes about it and its circumstances with the passage of time. “‘Seventeen days only,’ she keened, / ‘Seventeen days only I had joy of you, my child’” (17-18).

Note: Line 16 is very liberally translated, if not mistranslated. It is not that the mother has ceased to keen “about his years.” She “has not keened for years now.”

“27 June 1906, 2pm” is a poem filled with tragedy, despair and hopelessness. The boys tender age of 17 is repeated throughout the poem to further emphasize the cruelty of the murder against him. The speaker makes it clear that not only is the boy so young, but he’s also innocent in this case.
Emotion is greatly expressed in the poem through the boys mother. She is described as laying under “the savage sun” moaning and howling like a beast. It sounds as if her grieving is almost overpowering her as she can no longer go on. The sun plays a cruel role in the poem. The savage like quality that it is given makes it seem as if the sun is intentionally beating down on her to cause further pain and destruction.
To describe the boys hanging body as “beautifully wrought” adds a sense of peace to his horrible death. However, this is the only line in the poem that adds any light. The next lines return to the agony and pain felt by the mother. The very last lines of the poem state
“Seventeen days only,” she keened,
“seventeen days only I had joy of you, my child.”
I think the mother might have felt that now that her son was gone, she realizes 17 years flew by and now only felt like 17 days. She might be associating her teenage son to a newborn of only 17days, because regardless of his age, she lost her innocent baby to murder.