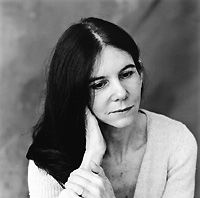 Meanwhile the lilies start to close

as if withdrawing from the fragility of the outer meanings.

each looks like an x-rayed hand, fingers clenched and bending,

flaring whitely where the rays Roentgen discovered by mistake

and named X for the unknown

have entered them in every dimension.

My window holds a row of billboards.

like flawed computations, and eyes always open, over the echoing

prosperity, each face an admission ticket to something the wind

doesn’t move through, can’t blow down.

A man out walking his dog passes underneath the billboards.

his face not digitalized, the swervings that must be in him,

the secret swayings and severest

wonderment, amazement, under this most vivid distrust,

I hear him calling to the dog.

So small they look, like toys beneath the billboards.

Softness of skin, of hesitance, kingdom of invisible echoes and delays,

raw flesh of lilies, and fog over the city now,

in this meantime I watch the man walk home

through threshold after threshold of his thoughts opening and unfolding,

admitting and releasing him, grazing his skin

and searing him or calming him, and how I cannot feel them, cannot know.