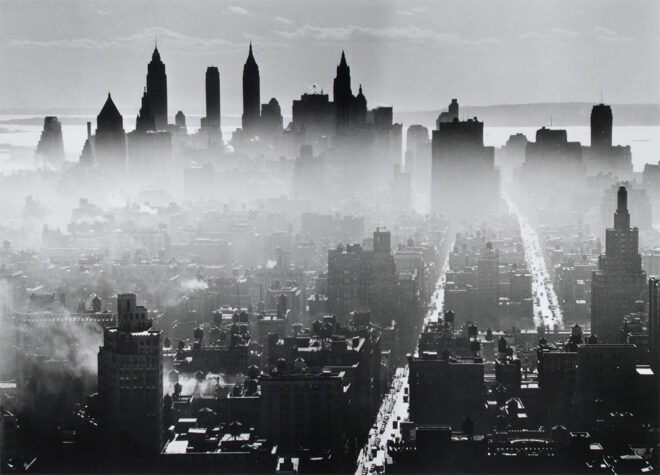 Self-growth and self-help training and workshops began booming in America in the 2000’s, but it has been an American tradition since Benjamin Franklin’s “Autobiography” in 1818. Franklin called self-help and self-growth –  “Project for Moral Perfection”. The United States has one of the biggest self-help industries in the world with a projected income of $13 billion (about $40 per person in the US) by 2022. In 2019, I decided to be a part of this fast growing industry and thus, I decided to relate these works of art to self-reflection and transformation.

Andreas Bernhard Lyonel Feininger was an American photographer and scholar of photographic technique. He was born in Paris, France on December 7,1906 and came from an artistic family; his grandparents were known musicians in France. He is known for his experimental techniques and his black and white scenes of cityscapes throughout Manhattan. He also studied as a cabinetmaker and architecture, which explains his fascination with the buildings and the views of Manhattan. He moved to the United States in 1939 and established himself as a photographer in New York. He passed away on February 18, 1999, in New York City.

This photograph is in black and white taken on a foggy day. It was taken from an elevated location that overlooks the buildings of Manhattan. The shadows of the city scape are horizontally cut through by a thick white cloud that gives an illusion of a separate city scape.

“Growing up, New York has always been one of the places that I have dreamed of living in. The saying, “if you can make it here, you can make it anywhere” resonates with my passion and ambition of staying put in this city. This image presents New York City as an intimidating place to be, but the foggy and cloudy presence in the photo might symbolize God, or the Universe as a source of strength to get through tough times as I continue chasing my dreams in this city.”

Questions to the viewer – How do you see New York City in this image? Does it evoke any form of emotion for you?