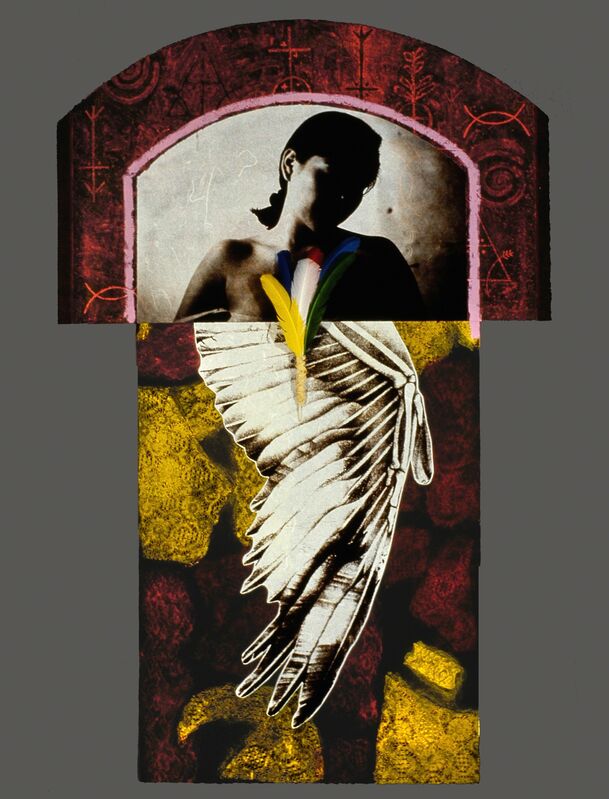 Juan Sánchez is considered one of the most significant Nuyorican artists of his time. His art calls attention to issues of social justice, American colonialism, and the survival of Puerto Rican identity and culture. Victoria de Samotracia part of series of works by Sánchez that portray female/femme characters and imply the shape of a dress. This particular work draws inspiration from the Winged Victory of Samothrace (sculptor unknown) which can be seen at the Louvre in Paris, France. While Greek portrayal of the Goddess of Victory stood to represent the conquering of a small island, the demure “Afro-Taina” – with only her left wing remaining and her bouquet of feathers held as an accepted offering – evokes the quiet and yet intense strength of a surviving nation.

Sánchez himself exists in the intersection of being Black and Puerto Rican, while also being born and raised on the mainland in Brooklyn. The artist has often described this life experience of navigating this diasporic separation as being part of the island’s “phantom limb”. Much like her Grecian counterpart in Paris, the body, face, and left wing of Puerto Rico’s Victoria de Samotracia exists with us here in New York while they still claim her amputations. With that in mind, as history has continued forward, small appendages of Nike are uncovered and reunited with their soma.