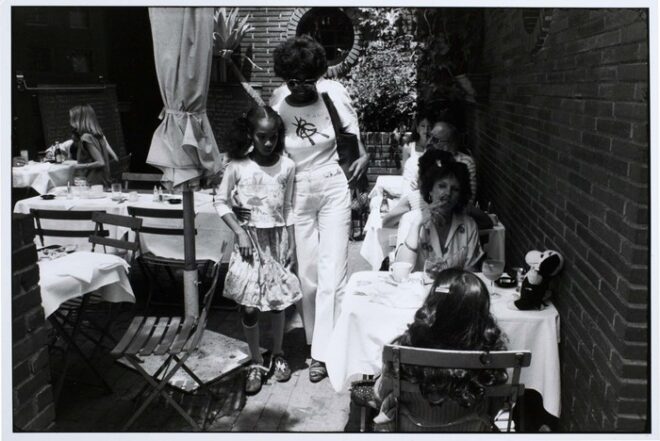 Garry Winogrand was an American street photographer known for portraying social issues and American life in the 1960-1970s. He studied painting and photography at Columbia University in 1948 and started his freelance photography in the 1950s. This black and white photo was taken in 1978 in California when Winogrand just moved to California. He also took many other photographs in the same series with the title, “Beverly Hills”. The photograph documents an expensive outdoor restaurant. All the people seated are white but an African American mother and girl are seen standing. They are documented passing by a white mother and daughter who are seated.

The young girls are making eye contact and the standing African American mother is smiling at a girl who she passes by, seated. But the white mother who is seated is not making eye contact with the other family and smokes a cigarette, even in front of her child.

This photo is a unique scene because I do not think people continue to smoke in outdoor restaurants these days, especially not in front of kids. Also, it is common today for parents to make eye contact when their kids are looking at each other.

I get a sense that Winogrand intended to portray racial segregation and financial struggles in Beverly Hills in the late 1970s. Back in the late 1970s, when this photo was taken, the U.S. was suffering from significant inflation, which could be a reason for the white mother to not make eye contact with others due to her own financial stresses.

The Following Label Was Written By Bianca Bailey:

A City University of New York alumni, Gary Winograd studied painting at City College of New York and painting and photography at Columbia University. He is known for capturing everyday life in his work, images of daily activities. Winograd received a Guggenheim Fellowship that allowed him to explore the country and continue to photograph in several states including California. In California, he created this series Women are better than men which was a tribute to the recognition and appreciation of women. This image shows a black woman and daughter walking past a white woman and daughter. The white mother is smoking her cigarette unbothered not paying attention to her child, and the black mother is smiling with her eyes locking the floor as she walks past the white mother and child holding her daughter close to her. The two children lock eyes, assuming they are seeing each other for the first time.

Possible thoughts running through the little black girl’s mind: How do you wake up in the morning with a big smile plastered on your face?

One thing I would like to do in this world is to build a bridge from my heart to yours. I dream in the color of your eyes; do you notice mine?