Owner Brian Washington-Palmer, originally from Berkley, Calif., believed Harlem needed a space that would complement the influx of new residents and development of new businesses and apartment complexes, so he transformed his previous Caribbean-Mediterranean restaurant, Native, into La Bodega 47 Social Club this past March.

END_OF_DOCUMENT_TOKEN_TO_BE_REPLACED

While the jobs were welcomed and retail sales have generated millions of dollars, small businesses in the area have not been reaping benefits since the arrival of East River Plaza, which houses a Target, Costco Wholesale and Marshall’s among other chain outlets. END_OF_DOCUMENT_TOKEN_TO_BE_REPLACED

The South meets El Barrio at Harley’s Smokeshack & BBQ located on 116th Street and First Avenue. Harley’s brings forth a new culture of food to the neighborhood, and there are two things I believe keep East Harlem’s residents coming back for more – the El Barrio Apricot Margarita and the restaurant’s detailed décor.

The drink menu is an extensive one, ranging from craft beers to sangria, but one of the most popular cocktails on the menu is the El Barrio Apricot Margarita, END_OF_DOCUMENT_TOKEN_TO_BE_REPLACED

While my goal is to showcase gentrification of Harlem’s food scene, all aspects of gentrification in Harlem are important. The transformation has been ongoing in recent years, and is visible through the increase of middle class residents, construction of elaborate apartment complexes, and the rise of small businesses that cater to a wealthier clientele. As the “new Harlem” continues to develop, the “old Harlem” is fading away. Preserving the history of this New York City neighborhood is important – which is further explained in the following podcast featuring Arthur Lewin, a professor who specializes in Black and Latino Studies at Baruch College.

Professor Arthur Lewin at Baruch College speaks on his opinions of gentrification in Harlem:

“Harlem is the capital of Black America,” professor Lewin said. In the early 1900s thousands of African Americans END_OF_DOCUMENT_TOKEN_TO_BE_REPLACED 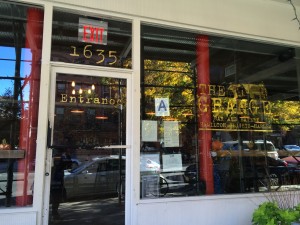 Roy Henley, owner of The Grange Bar & Eatery, and I engaged in an enlightening conversation at his restaurant. He gave me a brief spiel on the history of Hamilton Heights and how interconnected the theme of the restaurant is with area. He filled me in on everything a customer would want to know about the development of the restaurant, but also everything a resident would want to know about the transforming neighborhood it resides in.

If Harlem residents are looking for organic, farm-to-table eats, look no further than this farmhouse bistro on 141st and Amsterdam. END_OF_DOCUMENT_TOKEN_TO_BE_REPLACED 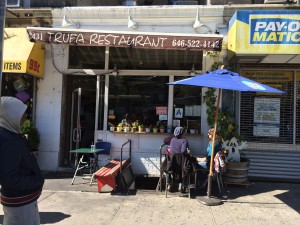 Trufa, located on 140th Street and Broadway, is the smallest restaurant I have ever dined at. Despite its size, this Italian/New American eatery plays a huge role in the neighborhood’s budding gentrified restaurant scene. Trufa has taken the place of a restaurant that once offered Mexican eats, and currently serves Italian/New American comfort food; including pressed sandwiches, pasta dishes and burgers. On a Sunday afternoon, my boyfriend and I END_OF_DOCUMENT_TOKEN_TO_BE_REPLACED