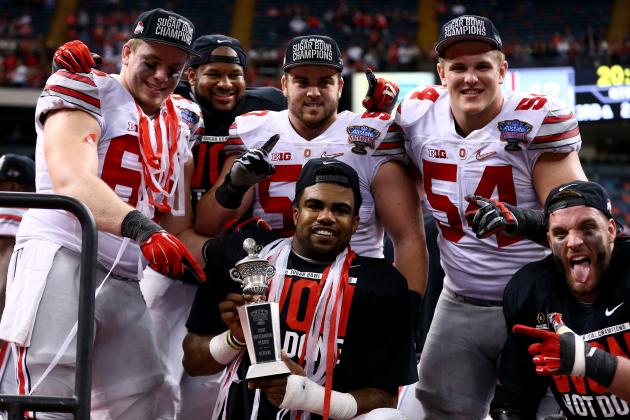 When Ohio State hoisted the first ever NCAA Playoff National Championship trophy, at that moment, they were far from the only winners. Ronn Torossian breaks it down.

We have to start with Ohio State. The Buckeyes’ last national title came on a HIGHLY disputed penalty in double overtime against Miami. Worse, it came in a game that was already, unofficially, over. Everything, that happened after the field was cleared, and the teams came back out, will forever be a matter of public derision and dispute. But not this title. Ohio State routed the Oregon Ducks so convincingly that the specter of the Hurricanes is all but a distant memory. Bucks fans have reason to be on top of the world, even as their phenom story third string quarterback publicly ponders declaring for the draft.

Then there’s ESPN, the network that brought you more football that mattered than ever before. On game night, more than 33 million viewers tuned in to watch the Bucks play the Ducks. That makes it the largest audience in cable TV history. The network paid billions for the rights to the title game for the next decade, and it looks like that investment will continue to pay off.

By far, the biggest winner was the NCAA. For years, the governing body of collegiate football has been adamant against a playoff system. It’s not that they didn’t think it could work. It’s that they didn’t WANT to see if it would work. They players knew it. The fans knew it. The media knew it. And everyone hated the NCAA because of it. Honestly, one more disputed national champion and the association was in for a major fan exodus and yet another excoriating round of fire from the media. Then, finally, after years of saying it could not be done, the NCAA did it…and it proved to be as simple and logical as everyone always insisted it would be. So, how does this make the NCAA a winner? Well, it seems all is forgiven and forgotten. The split national titles, the gaffes, the teams left out in the cold, all the years of insisting what they just did could not be done. There’s finally an undisputed national champion, and even the most disgruntled fans have a reason to love college football once again.