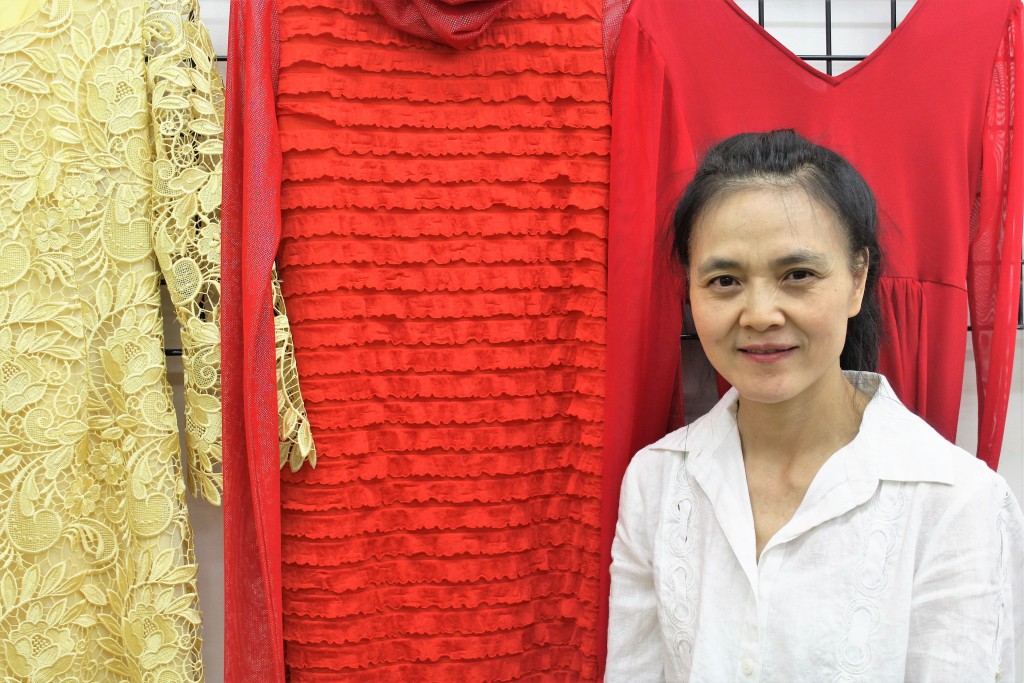 Women’s fashion designer Way Zen, celebrates Earth Day with her closet industry friends at her small boutique shop, which is crowded with plants and bright garments, only two blocks away from Herald Square.  She served her guests an “earthly” inspired menu with foods like purple cabbage and freshly grown almonds.

Zen’s infatuation with her Chinese culture and western culture combined with nature are the elements fused together creating her brand JSong.

She studied fashion design at Seneca College in Toronto where she initially struggled to make ends meet as a college student.  Zen supported herself by creating samples and selling sketches to local boutiques with the help of her friend who manufactured the samples at his factory.

“After different boutiques started to reach out to me, asking to sell my designs in their stores, I told my friend we need to start a company.” said Zen.

Given the success Zen garnered in the local Toronto market, she and her friend decided to move to New York, expanding their budding business; she loved her newfound city-life from experiencing culture diversity.  The name “Jsong” is a creation of the factory’s initials “JS” combined with the words joy and song.

“JSong evokes the feelings of joy and song,” said Zen. “I wanted to make clothes that would bring joy and story from the wearer’s life, for them to express their essence.”

What makes JSong’s designs different from other brands is the fact that they are made of high-quality yet sustainable wool, linen, and cotton with a hint of polyester for that extra shine. –Zen’s close friend, Jean, a former editor for Red Book sported a floral print jacket that is “over 15-years-old” (a testament to JSong’s quality.)

The brand’s other distinctive feat is their embroidery process.  The factory where Zen manufactured her clothes initially only specialized in embroidery and that process became adapted into Zen’s clothing. Zen wants the women who wear J Song to not only embrace their femininity but to tell visual stories to onlookers.

“Our embroidery is different than anyone else’s embroidery because ours has a story behind every piece,” said Zen, “For instance I have this dress that if you’re familiar with Chinese calligraphy you will see the symbol mei.” (美)

As for her thoughts on models, Zen casts them dependent on the type of look she wants to present each season.   She wants her models to be able to showcase confidence while still having a unique personality.

“This season my theme is Green Story and we are looking for exotic features,” said Zen, “We might say ‘oh red hair would be great because it’s totally different and stands out’ because it would portray a sharp image.”

Zen never thought she would be able to turn her love of fashion into a career but continues to be humble.  She genuinely enjoys the process of designing outfits that tell stories of nature and tries not to overwork herself because that can hinder her creativity.

“Fashion is a means to life for me and it helps me express myself,” said Zen.  “At the same time it helps me inspire others.”