A new report released by the Council of Economic Advisers at the White House showcases the steps the Obama Administration has taken over the last eight years to combat income inequality in the nation. This report focuses on three specific areas where the Administration has achieved its most substantial and immediate success in reducing inequality—restoring economic growth, expanding access to health insurance, and enacting a fairer tax code.

“Changes in tax policy since 2009 and the coverage provisions of the ACA will boost 2017 incomes in the bottom quintile by 18 percent, or $2,200, and in the second quintile by about 6 percent, or $1,500, relative to what they would have been under the continuation of 2008 policies. These policies will also boost incomes in the middle quintile by 0.7 percent, or $300. In contrast, these policies will reduce the after-tax incomes of families in the upper tail of the income distribution, particularly those in the top 1 percent. Targeted tax increases will reduce after-tax incomes by 5 percent for the 99th through 99.9th percentiles and reduce after-tax incomes by 10 percent for the families in the top 0.1 percent, a group projected to have average incomes over $8 million in 2017.

This is good news!

Much has been made over the hawkish tendencies of Hillary Clinton. She voted for the Iraq War in ’02, supported Obama’s Afghanistan surge in ’09, strongly advocated for intervention in Libya in ’11, and has called for a no fly zone in Syria on the campaign trail. The New York Times Magazine wrote this wonderful profile on how the junior senator from N.Y. who sat on the Senate Armed Services Committee became the hawk that she is today.

Her critics often lump her in with John McCain, the hawk to end all hawks, which I think is unfair but you can’t deny her trend to advocate for the use of military force. You’ll recall the term “smart power” that, as Secretary of State, Hillary Clinton was famous for employing. She focused on building coalitions and approving sanctions as a way to manipulate outcomes and using force only when necessary.

We’ll have to wait and see how she would use the military if she gets elected but I think some of the perceptions on her are a little exaggerated. Is she more likely than Obama to take more forceful position on issues like Syria? Probably. Is she some trigger happy stateswoman that is just waiting for the next conflict so she can send some troops? No. 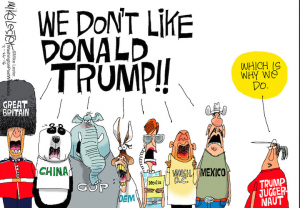 The Council on Foreign Relations has good compare-the-candidates summaries on their website. Here is the quick run down on Trump vs. Clinton on trade. But there are a lot more topics to review (as you put the finishing touches on your memos). 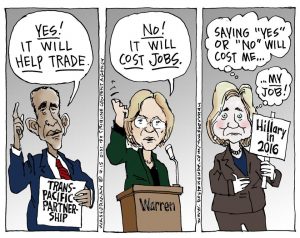 This is just a followup on some of our class discussion last week regarding the ever-diminishing reliance of our economy on actual manufacturing. With our current reality ushering us all (rather forcefully) into an almost purely digital age both socially and economically, this article does make a good point of how our movement away from a focus on tangible resources and a movement toward a higher valuation of ideas is encouraging a new era of collaboration across borders – social, economic, national, you name it – higher levels of cooperation amongst people and corporations is necessary in order to be successful within this newly developing worldwide reality.

Here’s the infographic I had mentioned: 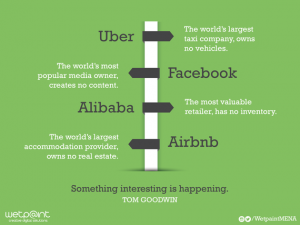 It’s easy to forget that as we all sit here and listen to Trump talk about fencing out Mexicans and banning Muslims from our country, across the pond a lot of Europe is still trying to effectively manage their own migrant related issues. The refugee crisis has created a uniquely challenging situation for the more developed countries on the continent, as it is not an easy task for a leader to balance the moral obligation – influenced greatly by the pressure exacted by the rest of the international community – to assist people of other nations in their desperate time of need, while making sure not to disadvantage or neglect their existing constituency in the process. Even if no massive changes actually occur in the lifestyles of citizens, members of the population are likely to take action against [their perception of] the social & economic issues that the new transplants have bestowed upon the country. The distribution of an “Anti-Migrant Repellent” in Denmark is just one example of how some people are choosing to express their refugee-related discontent. I personally didn’t expect a form of activism with such a reprehensibly low maturity level to come out of Denmark of all places, but every barrel has a bottom and somebody has to dwell there I guess. One funny (or rather, terrifying) thing is that (although I’m sure this was done intentionally by the speaker) Trump’s xenophobic rhetoric has itself ‘migrated’ right into the daily vernacular of the European people, as shown by a quote from the leader of the party that started this ‘spray’ initiative: “We are not saying that migrants are all rapists, but the problem with mass migration is the mass, and because of the mass it will in time replace the indigenous people of Europe.” This begs the question; would this have all gone down the same exact way in the pre-Trump-running-for-president years of our world? How long will it be until we can as a human race collectively accept the genuinely devastating damage being done to the human population and our social relations with one another due to Donald Trump’s hate speech and its rapid spread across the airwaves to every corner of the world?

The Netflix miniseries “The Night Of” was an overnight hit among viewers and critics alike. It had a captivating story line led by relatable characters that people quickly became emotionally invested in, combined with suspenseful cliffhangers that made some viewers unable to resist binge-watching the entire series in just a few days (I may or may not be one of those guilty parties…). However, it wasn’t just the superficial cinematic appeal that made this show such a success. A huge contributing factor to the wide range of viewers “The Night Of” attracted was how it fearlessly and directly broached the topic of racism, particularly the current climate surrounding terrorism and the racial profiling of Middle Easterners. It was also unique in it’s honest presentation of the vast differences in how each character interpreted the night’s events, going beyond the obvious role that race plays. It spanned a whole spectrum of social differences among the characters – from their economic strata, to their relationship status, to their chosen fields of work, and even the different positions some of them held within the same career field – which was done with the purpose of opening the audience’s eyes to the reality of just how much these seemingly minor differences from one person to the next can impact their worldview. The topic is relevant to our current state of affairs and the show succeeded in educating viewers in an entertaining, somewhat addicting, method of communication. If like me you were left wanting more once the series concluded, you may share in my excitement at having discovered this book that was just published titled The Good Immigrant. It is a collection of stories compiled by Nikesh Shukla about the experiences of people living as immigrants in Britain, which I’m sure will provide some interesting insight for the purpose of comparison to the experiences of immigrants living here in the U.S.  One of the stories is authored by Riz Ahmed, the actor that plays the main character in “The Night Of” and I very much look forward to reading about what his real life experiences have been as an immigrant as compared to those of his character Naz. The title of one online review of the book sums it all up nicely: “Sitting comfortably? The Good Immigrant will change that: This collection of essays about black and minority ethnic experience in Britain is a powerful antidote to generalisation and lazy thinking.” 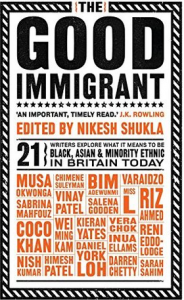 …but I sure hope so. This CNN.com article seems to believe that it will. Monday night’s debate put climate change on a map in a big way by alerting the nation to Donald Trump’s affinity to lie or flip flop on his stance. I can completely see how Hillary’s advisors would see this as potential chance to grab millennials as climate change is one of Obama’s biggest platforms and young voters ran to the polls to vote for him, however I do not recognize climate change as the issue that caused those young voters to head to the polls. I voted for Obama because I had family and friends away at war, amongst other reasons. Hillary’s strategists need to address issues that are dear to millennial hearts, and as a millennial myself I can name a few but will start with two: College Debt and Mental Health. Though Hillary does have agendas on both student loan forgiveness and mental health, those platforms are not being elevated enough in my opinion.

In America much deliberation around climate change has been in relation to jobs. The thought process that many follow goes a little something like this.

1. Nation’s power plants are forced into limiting their emissions  2. The need for workers will decrease 3. Unemployment skyrockets  4. America is doomed and loses its superpower status.

No need to mention all the new jobs that would erect at renewable and solar energy plants. In any event, we often forget how other nations are impacted by a change in an item we all share, the atmosphere. In Iran, Lake Urmia is essentially disappearing partially as a result of  climate change. If you recall learning about the Nile River in grade school and all the many ways it supplied for the people, Lake Urmia is similar in functioning. Local farmers are struggling to tend to their crops and growing new ones seems futile as the surrounding lands productivity has diminished. It is said that the lake had healing powers and once used to bring tourism from near and far into the country. The question here is: Why aren’t we concerned about the loss of jobs and the effect on the economy if we don’t get climate change under control?

Details about presidential candidate Donald J. Trump’s tax plan can be found on his website –www.donaldjtrump.com. According to his website presidential candidate Donald J. Trump will change the existing tax laws to make America great again by collapsing the current seven income tax brackets into three brackets, lowering the business tax rate from 35 percent to 15 percent for both big and small business and eliminating the estate or death tax amongst other things.

What Trump’s tax plan means for the economy

Trump’s plans aims to reduce the nation’s tax burden and somehow boost economic growth at the same time as if government taxes don’t play an important role in building the society we see. According to Jared Bernstein, a former chief economist to Vice President Biden, Trump’s tax plan involves tax cuts heavily tilted towards the wealthy and relies on the theory of trickle-down economics which presumes “a tax cut that raises the after-tax wage or lowers the after-tax cost of capital could boost the supply of these critical variables, increase growth, and spin off some revenues.”

“My plan will embrace the truth that people flourish under a minimum government burden and will tap into the incredible, unrealized potential of our workers and their dreams,” Trump said in a recent speech to the Economic Club of New York.

Jared Bernstein states, “Based on its -trickle-down economics- historical record, listeners should wholly discount linking high-end tax cuts to faster growth. What they will do is exacerbate after-tax inequality and raise the budget deficit.”

The New York Times has a good piece on the uneven benefits of trade, as seen from the US and Europe. Well worth a read.